Should this be the face of Canes Baseball? 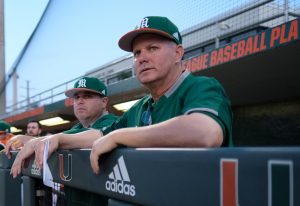 When deciding to write this, I first had to decide how deep down the rabbit hole of university politics and family lineage I wanted to go. The answer, not very deep.  We all know who Gino’s father is and what the name DiMare means to this place. It is what it is. For me all it means is that whenever a change is one day made, it will have to be done with the utmost class and respect.

So, I’m going to remove all that other stuff and simply review Gino’s performance on the field. We all know that there are certain numbers in baseball that are used as gauges. One of those numbers in college baseball is 40 wins in the regular season. Gino took the gig prior to the start of the 2019 season and inherited a squad that had barely finished above .500 the two years prior.

So, you can look at these two ways depending on where you want to fall. He’s had 3 full seasons and has 2 40-win campaigns under his belt. He’s been to regionals all three years and most recently hosted our first regional since 2016. Under his short tenure the Canes have scored over 450 runs in two of the three seasons and launched 90 homeruns this year.

The other way to look at it…we’re treading water and the roster turnover has been way to high. I get this point, and honestly, I’m almost at this point…almost.

I’m looking at this roster and the bats are set and young for next year. 100 homeruns and 500 runs are both legit on the table. The big question for me is the pitching staff. Gino needs to figure out how to develop more starters and fast. Like within the next 8 months fast. That’s the crux of college baseball. You can cover up starting pitching with bats and mid-week games against inferior opponents, but come regional time, you need 3 guys. Your ace can only pitch once.

So, I’m for Gino getting another season. He got us to #2 in the country at the midpoint. Yes, the backend of the season was a mediocre mess, but the whole body of work warrants another season…and not because of his last name.

PS: I can tell you that AD Dan Radakovich seems to be more pissed off at the lack of fan support at the Light this year than the team’s lackluster ending. So take that for what it’s worth.