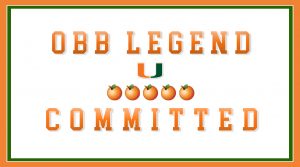 For those that were curious how long it would take for Mario and his staff to bag their first 5-star of the 2023 cycle? Fourth of July weekend was the correct answer. We knew that Mario and Alex Mirabal would get us some beasts in the trenches and young Francis Mauigoa fits the profile of what they want. Francis is 6-5 and listed at 330. He’s been at IMG for the past year after relocating from America Samoa. This wasn’t a huge surprise as many figured he’d end up at Oregon if Mario were still there. The fact that he had already relocated further east to Florida made it a very easy match. Probably didn’t hurt that Big Joe Salave’a is one of his uncles. Listen, it’s all about who you know in life lol. The commitment shoots the Canes up the #10 in the 247 Team Rankings for the class of 2023 and its only July.