Big 10 vs SEC…Where the Canes should be

It’s amazing the number of things over the last handful of years that I did not see coming. Obviously, I knew that conference realignment was always going to be a fluid situation, but the bombshell that dropped last week with USC and UCLA leaving the Pac-12 for the Big10, yeah…I did not see that happening this offseason. But alas it has and as a result there are significant ramifications for the rest of college football, and particularly Miami.

We’ll begin with the obvious, there are now two power conferences, and the ACC isn’t one of them. This is going to be the Big 10 vs the SEC and when it’s all said and done, if you’re not in one of those two conferences, regardless of your geography and history, you will be among the also-rans. Those praying for relevancy every year. The now ridiculously named ‘Big 10’ will have 16 teams. With Texas and Oklahoma, the SEC will have 16 as well. So where does it stop? What’s the magic number that finally puts conference realignment to bed? 18, 20, 22?

For the Miami Hurricanes the mission is simple, they need to get into one of those two conferences. Makes no difference which one, but when the music stops, they can’t still be in the ACC. So, the options…

One would think that the Big 10 would want to get another two west coast teams to give USC and UCLA a little travel relief. The Big 73 is big on academics, so one would think either Cal or Stanford to be paired with Oregon or Washington. Or perhaps the thought of large amounts of green causes the Big 10 powers to decide they have enough academic institutions already and just bring on the Ducks and Huskies in a strictly football move. That brings the conference to 18 and we haven’t even mentioned Notre Dame. Meanwhile, the SEC is suddenly realizing that while they have power in quality, they don’t in terms of media markets. The Big 73 now reaches from coast to coast…literally. The SEC will have to counter and I’m guessing busting out of their geographic footprint will be discussed in depth in those cigar filled southern back rooms. 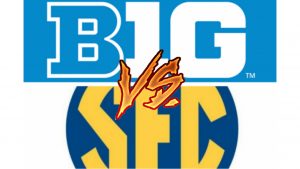 I’m not going to lie; I have zero desire to play in the SEC. Florida State seems a much more logical choice. Besides, Florida will absolutely use any veto power they have to keep Miami out. Bitches been running from us for 30 years. Besides, Miami has always been more of a national brand, they belong in what will soon be the National Conference. Also, the Big 73 will want a footprint in Florida for recruiting purposes. If not, they are giving up the most significant recruiting area in the country to the SEC. No way they want to do that. Lastly, if you don’t think tv execs are salivating over the yearly matchups with Miami, USC, OSU, PSU and ND you’re crazy. For me this isn’t even a close debate. Outside of geography, we have zero ties to the SEC and geography has been thrown out the window with the Pac-12 play. Miami isn’t a ‘southern city’. We pair much better with a NYC or Chicago or LA than rural southern college towns. From academics to everything else, Big 10 is the logical, natural fit. Shoot, they should’ve done it years ago 😉

Only one thing left for Miami to do now…

Win an ACC Title before they leave.