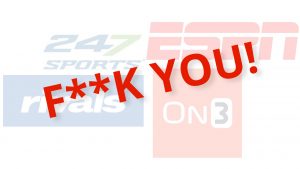 The Miami Hurricanes have always been on the receiving end of plenty of hate in all the various forms of media, new and old. As Canes fans we’ve historically used these moments to rally the fanbase and do everything we could to extend the biggest of middle fingers to the rest of the world and most likely the toolbags at the NCAA. But times have changed and while there are still many media entities that mock, ridicule and spread complete bullshit about the Canes, now some of the slimiest are actually targeting the kids.

Yesterday DE Jayden Wayne from IMG Academy in Bradenton announced his commitment to the University of Miami. It was a big deal. It was televised live and fanbases from the biggest programs in the country, and the SEC, were tuned in to see where this immensely talented young man was going to go ply his craft. Unfortunately, before he could even have his moment, the ‘expert services’ we all love to hate, dropped Jayden from a 5-Star to a 4-Star. For Hurricanes fans, it’s a story we know all too well. It is now absolutely a trend and if you deny it, you are denying facts. Published facts. For Jayden and his family, it was an undeserved shot.

We’re not exactly sure what sort of diminutively endowed person likes to log into their computer and literally piss all over a kid’s special day, but we’d love to accidentally drop a hammer on their big toe. You want to attack a program or a fanbase, go right ahead. It’s a major reason why we all love college football. But to make shit loads of cash off these kids and then use your platform to kneecap a kid on his signing day? There should be a special place in internet hell for sites like that. People can make excuses and apologize all they want, and we fully understand that there are ‘local’ and ‘national’ elements to these sites and that the local peeps have zero control over issues like this, and that sucks for the local people who we like, but there are prices you pay when you work for corporate titans and getting sprayed when they crap all over themselves is part of it.