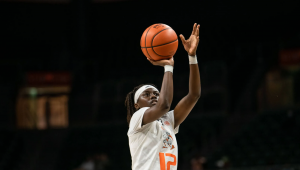 As the University of Miami Women’s Basketball team prepares for their season, we have just learned who they will be playing in the annual ACC/B1G Challenge…the Michigan Wolverines! Tip time is set for Thursday December 1st with television info to be released later. The game will feature two teams who made the field for last year’s NCAA Women’s Basketball Tournament. The Canes were dropped by eventual champions South Carolina in the 2nd round, while the Wolverines were bounced by Louisville in the Elite Eight.