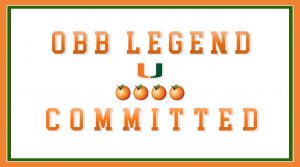 One thing all Canes can agree on is that the linebacker room is in desperate need of a talent infusion. Seems the staff agrees. Mario went after and landed 4-star local kid Wesley Bissainthe as his only LB in the 2022 cycle. He then pulled Caleb Johnson out of the portal from UCLA and landed Bobby Washington out of Miami Palmetto. Mario then decided to go head-to-head with his old mentor Nick Saban for the services of Fayetteville, GA 4-star linebacker Raul Aguirre and won! While Aguirre plays in GA now, he grew up in South Florida and his dad attended Miami Columbus so he and Mario will have plenty to talk about.

Aguirre is listed at 6’2” and tips the scales at 215. He’s projected as a starting power five linebacker by the major services. Aguirre is the eighth blue-chip commit this cycle, so we all know Roman is thrilled as his beloved blue-chip-ratio is intact. Of course, the biggest addition to the LB room this cycle might not be a player but new position coach Charlie Strong. This is shaping up to be an exciting group to watch grow this year.

🚨🚨 NEW COMMITMENT 🚨🚨 top 150 LB @lRaulAguirre HAS COMMITTED TO #THEU. A fast, physical and violent player with quick feet and quicker instincts, Popo is an instant impact player at the college level and Canes fann; WE. HAVE. MORE. COMING. The first of many for @CoachStrong_ https://t.co/8zkoAyZD7a