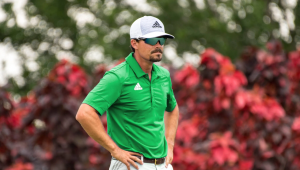 As the Miami Hurricanes Ladies Golf Team gets ready for their first season, head coach Janice Olivencia is filling out her staff for the 2023 campaign. Today she introduced assistant coach Marcelo Huarte who spent the last four years as head golf coach at Lynn University where he led both the men’s and women’s teams to Division II Regional appearances. I’m going to be honest; this hire is like the Frank Ponce as QB Coach. Huarte’s Lynn Women’s squad has finished in the top-10 last three seasons. In 2021 they were ranked #1 for most of the season and finished as runners-up. He was names Division II South Region Coach of the Year.

Huatre grew up in Miami and enjoyed a decorated career at Barry University where he helped lead the program to back-to-back national championships in 2013 & 2014. Huarte also spent two years as a touring professional after college on the West Florida Golf Tour where he bagged four top-15 finishes over 12 starts. Looking forward to seeing what this new staff does with all the talent on the roster.