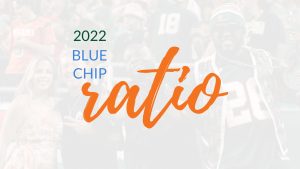 People familiar with the Orange Bowl Boys podcast are definitely aware of the Blue-Chip ratio. It is a stat unearthed by Bud Elliott and trumpeted by our own Roman that shows the ratio each team has of 4 & 5 star guys compared to 2 & 3 star guys. There has never been a team who has won a national title in the modern era without a blue-chip ratio greater than 50%.

With all that said, here are the only teams with a 50% or greater BCR for the 2022 season:

These are the only teams that can win the natty this year…according to history. Miami has seen their percentage increase as they were at 51% in 2019. What are your thoughts on the BCR, are you a believer?

Blue-Chip Ratio 2022: The 15 teams who can ACTUALLY win a national title.@BudElliott3 breaks it down in his yearly study. https://t.co/a6FjrEpDfn pic.twitter.com/y66dzZTBb6