Big Day for the Canes in the MLB Draft 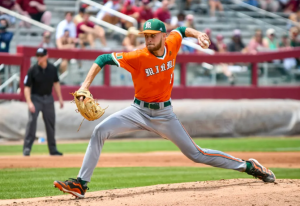 Miami Hurricanes ace LHP Carson Palmquist was drafted in the third round, 88th overall, by the Colorado Rockies in the 2022 Major League Baseball Draft. Versatility is key for the All-American lefty, starting his career at Miami in the bullpen before making the transition to fulltime starter coming in to the 2022 season.

Along with Palmquist, fellow pitcher RHP Alex McFarlane was drafted in the fourth round, 122nd overall to the Philadelphia Phillies. McFarlane primarily served as middle innings reliever and spot starter in 2022. Consistency is the name of game of McFarlane. Possessing an electric fastball and a nasty slider, he has all the tools to be a serviceable Major Leaguer bullpen arm.

Last but certainly not least, catcher Maxwell Romero Jr. was selected by the Washington Nationals with the 261st overall pick (ninth round). There’s always a need for a power hitting left-handed hitter in the big leagues and Romero certainly fits that bill.

Coming by way of Vanderbilt, Romero Jr. proved to be a vital cog in his first year for the Miami Hurricanes. He put up some impressive numbers in the middle of the lineup, a .272 average with 12 home runs and 54 RBI, with a .378 on-base percentage and a .507 slugging percentage in 2022.

Also of note, Miami Hurricanes commit Elijah Green was selected 5th overall by the Washington Nationals. The toolsy OF from IMG Academy in Bradenton, FL verbally committed to the Hurricanes in January 2019.

Congratulations to these Diamond Dudes and best of luck to them on their road to The Show.