Andrew Walters Returning to The U 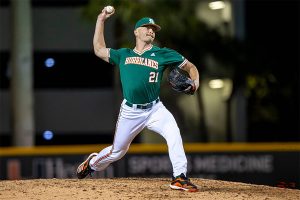 Gino Di Mare and crew received great news to start this Monday morning.  Canes closer Andrew Walters will be returning to The Light for his Junior season. Walters, a consensus All-American, was drafted by the Baltimore Orioles in the 18th round in this year’s MLB Draft. He will be returning to anchor the back-end of the Hurricanes bullpen.

In 2022, Walters cemented himself as one of the best closers in the nation. He posted a 1.65 ERA in 24 appearances with an ACC-leading 14 saves. As a NCBWA Stopper of the Year Award finalist, Walters struck out 62 batters in 32 2/3 innings pitched and held opposing hitters to a .116 batting average.

Walters hopes to build on a dominant 2022 season and increase the draft stock. Great news for a Monday morning, indeed.