Tight End-U. Make no mistake about it. The tight end lineage at the University of Miami is fierce. From Shockey, Olsen, Franks, Graham to new ambassadors such as Njoku and Jordan, Miami is no stranger to greatness. This season head coach Mario Cristobal has the luxury of having a talented and deep tight end group. 12 set personnel is when you have a single running back and two tight ends on the field. Offensive Coordinator Josh Gattis will definitely have that option.

This position group will have a new system that will exploit their talents. Stock up. Here is one example how Gattis used his tight ends from a year ago. A mug buster concept. The conflict of this subtle delayed tight end dump put the defender in an immense amount of conflict. The Hurricanes featured this concept in the spring game as well.

On to the the BIG 10 championship game and this delayed tight end route is a "mug" buster. The LB will sense no pass responsibility and then blitz the qb. (Think delayed spy)

Too bad the qb throws a bad ball and missed the option route at the top of the screen. #canes pic.twitter.com/Yh0rnJ75Lp

Will Mallory is the 6-5 245 lbs. fifth-year senior elder statesmen. In 2021 he started all 12 games catching 30 passes totaling 347 yards with four touchdowns.  Mallory ranked fourth on the team in receptions and third on the team in receiving touchdowns. His best game last year was in the program changing loss to FSU. Will the thrill caught five balls for a season high 72 yards with one receiving touchdown.

Mallory was recently tabbed among the John Mackey Award Watch List for the upcoming season. The Mackey is annually awarded to college football’s most outstanding tight end. Since 2000, six Miami players have made the Mackey Award finalist list and one claimed the trophy. Recent former teammate Brevin Jordan was top three in 2019. That year two tight end sets were in regular rotation and many considered Mallory the Robin to Jordan’s Batman. This year? Mallory and his senior leadership is looked upon to be the canes crusader.

Elijah Arroyo comes in at 6-4 235 lbs. and is a stud Sophomore. The Frisco, Texas native saw action in all 12 games including the opening game vs. the Crimson Tide. Arroyo caught his first touchdown of his career in the thrilling win over Pittsburgh. It was a 20-yad surgical strike from quarterback Tyler Van Dyke and easily could be a preview of things to come in ’22.

Arroyo was a consensus four orange prospect by other publications. He was listed as the No. 8 tight end nationally by ESPN and posted silly numbers in high school. As a member of independence high school he had over 1200 yards and 17 receiving touchdowns in two varsity seasons. Arroyo chose Miami over Alabama, Auburn, Georgia, LSU, Michigan, Texas, Texas A&M and USC to name a few.

Elijah Arroyo with his first career touchdown catch for the Canes 🙌

He’s a freshman TE I have rostered in quite a few C2C leagues pic.twitter.com/dCDJwVu7Sb

Brantley has flashed on the practice field and had a solid spring. The position group is incredibly top heavy but never underestimate the various-ness in sets and the niche roles tight ends can have in a pro style offense. A very capable tight end like Brantley could be used in pivotal situations during key games next year. 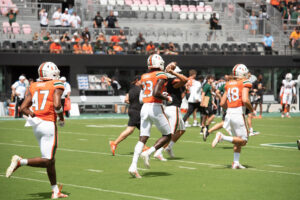 Jalil Skinner is the wildcard standing in at 6-5 and 210 lbs. This hybrid pass catching freak is from Greer, S.C. but relocated to high school powerhouse IMG academy in Bradenton, Florida. Skinner was selected to play in the 2022 All-American Bowl and was ranked the No, 2 tight end in Florida by ESPN. Skinner chose the Miami Hurricanes after a recruiting battle with the Crimson Tide. Skinner was also courted by Auburn, Clemson, Georgia, LSU, Michigan and Oregon.

Yes, the same Oregon who was coach by Mario Cristobal at the time. Skinner is a mismatch nightmare who seamlessly can be flexed outside and give the offense instant length and athleticism. This true freshman is making a case to have meaningful playing time and will be featured in obvious passing sets. Miami is Tight End-U and Skinner is that dude.

Dominic Mammarelli 6-4 248 lb. third-year redshirt freshman makes way from Naples, Fla. Mammarelli did not see any game action in 2021 serving primarily as a practice squad member. In 2020 he saw action primarily on the special teams unit. He was ranked the No. 2 tight end-H nationally and the No. 59 player in Florida by ESPN. With a run game initiative underway in the Gables don’t discredit the need for multiple tight ends and a run blocker.

Robert Prosek 6-4 240 lb. fourth year redshirt sophomore from Key Largo is listed on the roster and has served primarily as a practice squad player. He saw action in only one game last year vs Central Connecticut State on September 25th at Hard Rock Stadium.