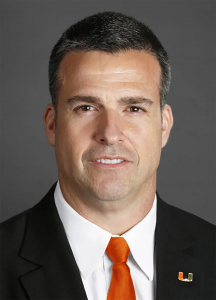 Mario Cristobal will be embarking on his first fall camp as the head coach of the Miami Hurricanes. Things get started on Greentree Practice Field on Friday, as they prepare for the 2022 season, which begins on September 3rd against Bethune Cookman at Hard Rock Stadium.

Nobody knows for sure just who will be lining up on the starting units a month from now. Many of those decisions will be made by the staff as the pads go on the next few weeks.

Here are some random thoughts and questions I have as we prepare for the upcoming campaign (and please keep this in mind, I’m just a fan, not an insider)..

The left side of the line is set with Zion Nelson at tackle, and Jalen Rivers next to him at guard. Jakai Clark (who was an upgrade over Cory Gaynor) will man the center position. At the ACC level, that’s a very good unit. However, the right side of the line has some question marks. Does John Campbell, who missed spring ball, and all of 2021 with a knee ailment, take over at right tackle, or is it DJ Scaife, who has actually played both guard and tackle during his tenure at UM with mixed results?

It will be interesting to see how to transfer portal guys in Jonathan Denis and Logan Sagapolu — two guys are very familiar with Alex Mirabel and his system — are worked into the rotation. Bottom line, there is a decent foundation (at least on one side of the line) but the challenge for Mirabel and Cristobal is to find the best and most cohesive five-man unit upfront.

To put it succinctly, last year may have been the worst linebacker unit I’ve seen as a Miami fan(which dates back to the late 80’s). They were slow, but made up for it by not being very instinctive, or well-coached.

Yeah, I get it, you’re not always going to have the ‘Bermuda Triangle’ (Darrin Smith, Michael Barrow and Jesse Armstead), Ray Lewis, or Dan Morgan, but the recruiting misses and mis-evaluations of Manny Diaz(who was in charge of this unit) were glaring. OK, putting that aside, who lines up and gets the majority of snaps in this spot?

Caleb Johnson, a former UCLA Bruin, was brought in from the transfer portal for a reason. Wesley Bissainthe, a highly coveted recruit from Miami Central, at some point will log some playing time. A guy that I’m intrigued by his Chase Smith, who was held out of spring practice. Smith is highly regarded by insiders but his lack of size might be an issue at the present moment.

The onus here is on coach Charlie Strong to at least get serviceable play out of this unit. That may not seem like much, but it would be an upgrade over what we saw last year. 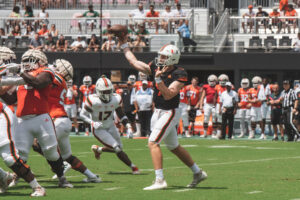 Yeah, Tyler Van Dyke is the starter. That’s etched in stone. But you do have an interesting battle for the number two spot. While Jake Garcia seems to have the inside track to be the back-up, there was certainly plenty of buzz over the spring surrounding Jacurri Brown, who enrolled early.

Going back to last year, Garcia and Van Dyke were battling to see how would be the number two guy on the depth chart behind D’eriq King. After King went down, both got snaps in the blowout versus Central Connecticut State and played well. But Garcia suffered a season-ending ankle injury. And well, the rest is history with ‘TVD’ putting on a historically good run in ACC play to solidify his status as QB1.

Garcia is a polished quarterback, there were many observers who preferred his quick delivery and mobility over Van Dyke. He’s a well-taught quarterback, who plays with a certain moxie. If he didn’t get hurt last season, there might actually be a quarterback controversy — because at this position, it’s a ‘controversy’, not a battle like at every other spot — in Coral Gables.

As for the 6’4, 210 Brown, he just might be the best athletic specimen Miami has ever recruited at QB. He can do things with his legs that most couldn’t, and he possesses a strong arm. But he does lack polish, and will need to be coached up in the finer aspects of the pass game. If he’s not redshirted, you could actually see a scenario where the staff actually has a short-yardage/goal line package for him (think Tim Tebow in 2006) to take advantage of his size and speed.

Regardless, this room has come a long ways from the days of Jarren Williams, N’kosi Perry and Tate Martell.

Just off the top of my head, the likes of Darrel Jackson, Akheem Mesidor, Mitchell Agude, Daryl Porter Jr. and the aforementioned Johnson, are now eligible to suit up after coming to Miami from the transfer portal. Which means that the defense of Kevin Steele will be fortified, in addition to the incoming recruiting class, and other defenders who were didn’t participate in the spring.
So in other words, what you saw on defense in April, isn’t what you’ll be seeing in the fall. Again, that doesn’t necessarily mean we’ll be getting the ’85 Bears unit, but this figures to be a much deeper unit across all three levels of the defense.
Managing Editor Notes: Article written by Steve Kim. Catch him also on the 3 Knockdown Rule with Mario Lopez