It is here. Finally. The Mario Cristobal era starts today as fall camp descends upon us. The final tune up before the orange and green formula one race car takes the track. Hard Rock stadium now has one of these that surrounds it by the way. Coach Cristobal made a simple declaration which embodies his entire persona. #CanesAreBackToWork.

The optimism is fully renewed within the Hurricanes program. A new head coach who is a dynamo in recruiting and an administration FINALLY committed to the big picture will do that. However here are three big camp storylines permeating Greentree practice fields as camp starts.

Who will be Wide Receiver One? The dominant “X” receiver who can continually win his one on one matchup on the outside is a necessity moving forward. If an opposing defensive coordinator can rest on his laurels and not worry about the quick over-the-top score then Miami is doing it wrong. This is Miami. Playmakers, especially at the receiver position, should be in abundance at all times.

Opposing programs have come to Miami continually to raid some of south Florida’s finest. Take any team who recently won a national championship and you’ll find a wide receiver whose phone number starts with 305/954/561 on its roster. Exhibit A: South Dade high school’s own Frank Ladson, Jr. went to Clemson. Now as a member of the Hurricanes will Ladson emerge and fill the void that record breaking Charleston Rambo left behind?

At 6’3, Ladson has the length to factor down field. The fourth-year-junior has made waves so far during his time here but his body of work can be considered incomplete. Jacolby George is another wide receiver who can threaten on the outside avenue. This silky smooth route runner from Lauderhill saw action in nine games and caught seven passes last year.

183 yards and one touchdown is George’s body of work however that stat line would be a great single game for “that guy.” Key’Shawn Smith started all 12 games last year and finished with 33 catches and three touchdowns. That ranked third on Miami in both catches and receiving but on the scale labeled dominance it would tip more towards adequate.

The slot group has some formidable aspects with receivers Xavier Restrepo and Brashard Smith. Sure a team can run its offense in the middle of the field but we have seen how a Miami team is limited when a dominate outside receiver is absent. Although the wide receivers are a big story line, there is a comfort knowing the tight end group can fill in the gaps.

Caleb Johnson is a Miami Hurricane😈😈🟧🙌🏻🟩

Johnson started for UCLA the last two seasons, and was a steady force over the middle – tallying 45 total tackles and 1 interception last year.

Mario Cristobal is a man on a mission 💯💯💯🔥🔥🔥 pic.twitter.com/OZhYvYkBic

Will the linebacker play pick up? Corey Flagg, Jr. and Waymond Steed, Jr. led the Hurricanes last year in tackling with 35 and 24 respectfully. Dan Morgan had 532 tackles in four seasons at Miami. Long gone are the days of the Bermuda Triangle. The only thing that continually got lost in the fog in 2022 was the actual ability to tackle. Missed tackles cost the Hurricanes last year and the linebacker position was often times culprits.

Caleb Johnson was California dreaming on UCLA’s roster last year. The 6th leading tackler on the team, Johnson will be looked upon to possibly anchor down the middle. His mamma calls him Caleb but we could call him Mike. The mike backer is the middle backer obviously and Johnson will be vying for some serious playing time.

Gilbert Frierson saw action in all 12 games but only made three starts. The lack of starts was a head scratcher and Frierson may have fell victim to seniority under the Diaz regime. Diaz was notorious for starting inferior senior counterparts. If meritocracy reigns supreme Frierson could see his role increase this year. Frierson’s productivity could rise simply due to a case of addition by subtraction.

Another intriguing option would be Chase Smith. Smith, a Palm Bay native, saw a role primarily as a special teamer last year. ESPN rated this prospect the number 53rd player in Florida coming out of high school and his speed flashed on film. New linebacker coach Charlie Strong has some intriguing options but has to bolster a group who greatly underperformed in 2022.

Will Tyler Van Dyke regain his form from a year ago? The undoubted QB1 on the team is none other than Van Dyke. The third-year-sophomore enters the 2022 campaign fully under the limelight. He is the reigning ACC Rookie of the Year and the ACC Offensive Rookie of the Year. If you see an NFL draft experts way to early predictions, Van Dyke’s name is on them in the first round.

New offensive coordinator Josh Gattis make his way from Michigan. He is a physical minded guy. His style is in perfect matrimony with coach Cristobal. How much of the concerted effort to run the ball will come at the sake of Van Dyke’s productivity? The Miami program having a Heisman candidate at the end of the year will pay unfathomable dividends. It is publicity you simply cannot pass up however there must be a balance. 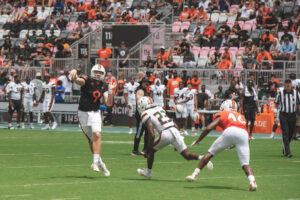 Van Dimes has the ability to continually put pressure on opposing defenses by pushing the ball with ruthless efficacy down field. For this to happen in ’22, TVD requires a wide receiver who can win the matchup like Rambo did a year ago. You also have to give TVD the time to do it (hello offensive line) and the offensive system needs to accentuate Van Dyke’s skillset.

The RPO will be less featured and the play-action game is set to take its place.  That doesn’t mean the RPO is going away completely, it is not, but that means there will be a learning curve in this offense. This is more NFL less up-tempo simple Lashlee. The premise is there. Gattis was the Broyles Award winner from a year ago and knows a thing a two about offense. The formula to keep Heisman level QB productivity and running game balance is what remains to be figured out.