The goat Ed Reed was noted today at practice. Presumably this has been his first sighting during fall camp. Camp is picking up and position battles are taking shape. Prize transfer portal Akheem Mesidor is one of those players looking to establish himself in the two deep. Mesidor was primarily used as a defensive tackle last season in a 3-4 scheme at West Virginia.

“I’m playing on the edge more this season than last. I still have to get comfortable on the outside again. I just have more space to work with now, so it’s a little bit of an adjustment. I mostly line up on the tight end, so it’s kind of tricky. But I am adjusting to it.” -Akheem Mesidor

Every new staff brings in changes. Every player typically reports these changes favorably and almost revolutionary to a fault.

“We’re competing, I love competition. That is what coach (Cristobal) says this program is about, discipline, toughness and accountability. Coach Cristobal is painting the picture and we’re just following the man with the plan.” -Akeheem Mesidor

Ed Reed is out here at Miami practice today. pic.twitter.com/i6OFHx8U50

Fifth-year DJ Ivey was next to take the podium. Much embattled at times, Ivey has the skillset to shine however the lights haven’t fully come on during games. Ivey is somewhat cognizant that there were issues that plagued the defense a year ago. Hopefully new defensive backs coach Jahmile Addae can maximize the most of the 6-1, 195 pound Ivey.

“I’m not too worried about last year, we’re going to keep that in the past, moving forward.” -DJ Ivey

“We are looking pretty good. We are just out here working, trying to get better each and every day. Have to keep working.” -DJ Ivey 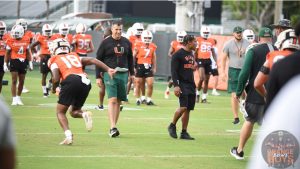 Finally, fifth-year senior and Miami native DJ Scaife, Jr. took the podium. The offensive line unit now has the benefit of having a former offensive line coach in Mario Cristobal as its new proverbial CEO. Except Cristobal didn’t have a background in sales, he had a background in trench-enomics. This unit stands to improve the most in terms of technique and attitude.

“We’re working. I like the aggressiveness that we’ve got. We’re going in the right direction.” DJ Scaife, JR.