The Miami Hurricanes season is descending rapidly upon us. We know the drill. Hurricane talk increases, a cone of probability lists an area from Homestead to Jacksonville and Publix commercials are on a loop. Ok, that might be the procedure for an actual hurricane (updates brought to you by Home Depot) but a storm is coming.

Coach Mario Cristobal will be graded this season. Head coaches typically are. There are many people holding red pens, administration and fan alike. An area where coach Cristobal will be measured is on his roster management and starter’s initiative. What is typically unfair is grading against a curve. The curve is his predecessor. Former coach Manny Diaz continually started senior options that habitually had more optimal younger counterparts.

The new head coach will march out his iteration of the Hurricanes bread on physicality, talent and toughness. We take a look at a potential two deep rotation. Offense is up first.

Tyler Van Dyke is stealing all the head lines and Jake Garcia is playing wonderful wingman. This is arguably one of the best quarterback tandems in the country. Van Dyke broke records a year ago and is the returning ACC Rookie and ACC Offensive Rookie of the Year recipient. Despite the total rebuild and commitment to a running game the season’s success rests solely on QB1’s shoulders.

Last year you had to retrofit Jaylan Knighton in bubble wrap towards the end of the season. Knighton sported the non-contact jersey proudly at practice (for good reason) seeing the options at running back were limited at best. This year a two deep is hard to nail down as you have many hammers at the position. Thad Franklin can give you the 240 plus bowling ball option and TreVonte’ Citizen-cane is the ultimate wild card. Citizen has been very natural in early camp and his athleticism is shining.

Offensive coordinator Josh Gattis will feature two tight ends on the field at the same time and for good reason. This group has a plethora of talent starting with Will Mallory. The fifth-year senior’s health will be the only concern as he looks to lead Tight End-U to glory. Jaleel Skinner isn’t listed on our way too early two deep but could easily factor. Skinner is your quintessential modern day hybrid tight end that combines length, athleticism and can be flexed out to wide receiver interchangeably. 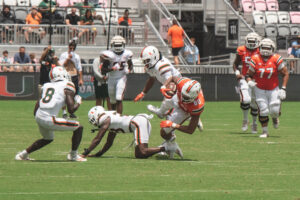 Someone on the outside between Ladson, George, Smith and Brinson needs to step up this year. Former NFL bound Charleston Rambo leaves a huge gaping statistical hole that needs to be replaced. The slot group is primed to take a step up this year especially in a system that brings them closer to the action. Tight sets will be featured more and don’t be surprised when the combination of Restrepo or Smith are asked to run the ball. This group has the biggest question mark coming in on the offensive side of the ball.

This group has many options moving forward and picking a starting five as of today is a challenge. When healthy, Zion Nelson and Jakai Clark are the only surefire starters that you can peg. Campbell, Rivers, Oluwaseun and Scaife can all be utilized as tackles and guards so good luck. Coach Cristobal and Mirabal have the healthy task of getting the right combination of chemistry and cohesiveness along the offensive line. Regardless of the final five this group looks to improve drastically over a year ago.