The list of legends at wide receiver who have came through the University of Miami rivals any school in America.. Let’s be real, Michael Irvin, Andre Johnson, Santana Moss and Reggie Wayne just to name a few. On the flip side of the rich history of wide out “The U” has only had six wide receivers drafted in the past 10 years. This group has also struggled with “butter fingers” as of late. New OC/WR coach Josh Gattis (2021 Broyles award winner) plans to change the course of mediocracy. Who will step up for the 2022 season? Lets take a look at the Wide Receivers.

Miami’s top returning pass-catcher at WR, Smith looks to pick up where he left off in 2021 where he started all 12 games. His career best game for yardage was at Pittsburgh where he totaled 82 yards on three catches. Smith also had good games against North Carolina with seven catches for 73 yards and vs. Michigan State, four catches for 50 yards. Let’s not forget he also had a streak of three straight games with at least one touchdown. Although fall camp just started and it’s too early for any official depth charts, Smith is in prime position to be WR1 this fall.

XR7 played in all 12 games last season and is a projected starter in the slot. Restrepo often compared to former Canes WR Braxton Berrios is poised to have a career year, especially with the chemistry he has with TVD. (It pays to be TVD’s roommate) Xavier’s best game last year was in the Heinz field shootout. Restrepo bested Pitt with seven receptions and a career-best 89 yards. Hurricane cornerback Tyrique Stevenson called him “a pure-out dog” and I believe we are going to see X come in clutch this year.

2 years and counting …. Extremely excited and honored to be apart of this team! No one does it better! Don’t forget to check out the legendary OBB’s for all the latest scoop on UM and the recruits! Straight🔥! @OrangeBowlBoys pic.twitter.com/OIfcOwRblL

Miami took to the transfer portal in search of a WR and was able to land Frank Ladson Jr. The Clemson transfer and South Dade native has unfortunately been riddled with injuries for most of his college career. In his three years at Clemson he totaled 31 REC, 428 YDS and six TD’s. His 6’3″ and 205 pound frame provides the Hurricanes with good size and speed on the outside. Coming out of high school he was the 4th best receiver in the nation and all of Hurricanes nation hopes he can return to form and be a menace for opposing defenses in 2022.

As a true freshman, the Miami Northwestern alum played in 11 games. Coming out of high school Brinson was the 25th overall wide out in the nation. Another big target for TVD to hit on the outside standing at 6’2″ his long strides make him a great deep target down field. His best game last year was against Michigan State with 3 catches totaling 33 yards. Look for Romello to get consistent playing time and to have more chances to bulk up those career stats.

Jacolby is entering his 2nd season and has a ton of potential to be that big time outside threat the Hurricanes need. The 29th ranked WR in the nation coming out of high school saw action in nine games last year. George had his biggest game last season with three receptions for 80 yards against Duke. Jacolby will get some burn this year coming out of the two deep. 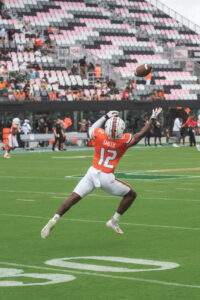 Brashard Smith is the shifty speedster out of the slot. I cannot wait to see the gadget plays from Gattis using Smith. His breakout game last year was against Central Connecticut State with five catches 91 yards and a touchdown. Smith averaged 14.2 yards per reception last season which is not too shabby coming from a true freshman. Coach Mario Cristobal has had some high praise for Smith so far this fall. Undoubtedly Smith is going to have a much bigger role in 2022 and I’m here for it!

Colbie Young is a guy that snuck in through the back portal door. However at 6’5″ he simply screams, “just throw the ball up!” Coach Cristobal claimed Young was “big fast and physical” and has been “outstanding” so far. It’s yet to be seen if he will have an immediate impact for the Canes. Young came in mid summer so he has some catching up to do. This is a high ceiling-low risk player that could be exactly what the Canes need to stretch the field.

Michael Redding III is listed as a third year redshirt freshman, he played in only four games last year before he suffered a season ending injury.

Isaiah is a true freshman from Murfreesboro, TN. He was the 49th ranked WR and the 11th ranked player in all of Tennessee. He stands 6’4″ and 205 lbs. Horton chose Miami over Alabama, Arkansas and Auburn.

Dante Johnson is a 6th year senior who is mainly a practice squad member. Josh Murillo is listed as a junior and transferred in from East Los Angeles College. Devon Perry is a redshirt senior transfer from Richmond.

Continue by checking out the 2022 tight end position group here.