The Case for Jacurri Brown

Jacurri Brown is the 6-4, 210 pound freshman from Lowndes high school in Georgia. He is a quarterback currently enrolled at the University of Miami. The dual-threat was nationally ranked out of high school. The number 192 overall player ranking in the ESPN300 did not happen by accident. It took talent, grit and determination.

The state of Georgia has had a knack for producing some top flight quarterbacks recently. It has been a peach state party at the collegiate level and beyond. Trevor Lawrence, Jake Fromm, Justin Fields, Davis Mills, Harrison Baily and Max Johnson just to name a few. Miami’s Jacurri Brown was a two-time all-state selection in Georgia’s 7A division.

Recently, there was a call from the media that Brown should contemplate a position change. Tate Martell was a quarterback who transitioned to wide receiver during his time here with the Hurricanes. If he could do it… The Valdosta native definitely has an abundance of athleticism. He is the only quarterback on the roster who would even remotely have a shot to transition to wide receiver. That is not an indictment, it is high praise.

I am comfortably at home in the lab. High School offenses routinely ignore quarterback drop to WR route relationships to a huge detriment. And when a 3 man rush gets through 6 kids, Jacurri Brown's athleticism was the only thing that could bail you out. @TheStateOfTheU #canes pic.twitter.com/MsanjtVRal

So what is it? He missed a couple reps in practice and now it is time to change his position? This isn’t an easy undertaking for the freshman. Every time Brown steps onto the practice field there is an ominous transcending entity beside him. Tyler Van Dyke is his name. Not many quarterbacks who play this game hear their name called in the first round. Van Dyke might be on his way to the podium next spring to shake hands with Roger Goodell.

The shadow that Van Dyke casts on the quarterback room is plentiful. It is immense. Van Dyke’s talent has the capability to create such a perceivable talent differential it could distort reality. Suddenly you could snap a judgement so premature that it makes you forget Brown is a young true freshman.

“You are not bad. You are just new” -anonymous

Frank Ponce is in his first season serving as the Hurricane’s quarterback coach. In an era of enhancements and player development that has yet to be seen at Miami, the byproduct is still unknown. The future is however bright. For every assistant coach that has been added to help compete with the blue bloods of college football by looking out, equally just as many are looking in.

Scouting reports aren’t singular-directional. They focus equally intent at Miami’s current roster as they would their current opponents. They have a quarterback’s coach in Ponce and a support staff dedicated to do what many pundits and fans might think impossible around these parts. This staff will develop talent and Jacurri Brown has the gift of time to be developed.

Let’s talk quarterback. I played this position a little bit, the local kid from St. Thomas Aquinas. You watch this position long enough and study it intently enough the small details materialize. Mechanical deficiencies pop up in film on a reoccurring basis especially from young prospects. It’s hard to find a prospect who is completely flawless. They are like unicorns.

A funny thing about mechanics and quarterbacking, they don’t always matter. That sounds impossible and incomprehensible. Are mechanics important? Sure. However athletic anomalies who have dominated this sport sometimes look far from the part. Tim Tebow accomplished great feats while having two left feet at the position. His elongated windup was more reminiscent of an 80’s pitcher than a pristine Joe Montana.

Again, Jacurri Brown might not be perfect mechanically but he’s closer to fix than fault. Recently on episode 34 of the Orange Bowl Boys former quarterback Malik Rosier was on and we asked him specifically about Brown. Rosier works with quarterbacks from time to time including Brown and Miami’s starter Van Dyke. In terms of the freshman he was quick to bring up how extremely athletic he was and called him a freak. The good kind.

In Rosier’s opinion, Brown has some real easy correctable mechanic faults to work on. (Freshmen quarterbacks typically do) Ultimately the bigger focus would come down to really gravitating to and assimilating the offense. When coach Gattis calls a play, you have to know why that play is being called. You have to know who you are attacking on the field. Quarterbacks need to know coverages. Rosier brought up excellent points.

I don’t think us casual fans realize how incredibly hard it is to work on your mechanics while trying to assimilate a complex new offense. It is a war between an intrinsic front, what is my body doing and an extrinsic bombardment. Learning the offense while the defense is attacking you incessantly in practice is a clash that can seem endless. Until the mechanics become second nature and rehearsed, the end result of facing a defense will be divided by mixed results. 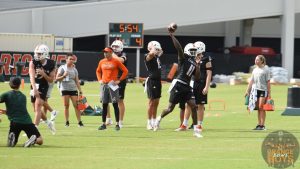 Calling for a position change this early into the young man’s career is incompressible and premature. The final destination is yet to be seen. Brown’s progress and development stand a chance because he has time. The best coaching staff post the Jimmy Johnson era will train him daily and Jimmy didn’t have the luxury of the modern day amenities and this staff size. Van Dyke will start this year. Garcia will be the backup. The raw can refine.

No one in Miami’s quarterback room has the athleticism that Jacurri Brown has. That should be the driving force to quell any opinion of a quick position change. His upside is incredibly immense. You marry what Brown naturally does athletically with a subtle refine mechanically and he is a firework ready to explode triumphantly.  Regardless of the final destination, put your seatbelt on, let the staff go to work and let the young man develop and learn. The kid is a quarterback. Full stop.