Behind the Episode-Chapter 34-Rosier & the Two Deep

That is another episode in the books. Malik Rosier joined us for this one and he is easily one of the Orange Bowl Boy’s favorite people. He took me a little by surprise because he looks like he just came off one of those stuck in the wilderness shows. Bearded up, Rosier definitely couldn’t play for the Yankees these days.

Rosier’s perspective on the offense was money as always. Having played the position his introspective views mixed with his intelligence seamlessly. He understands the game at a high level. Rosier has to, he is a quarterback coach. I wanted to know something that the casual fan might not know about current QB1 Tyler Van Dyke, who Rosier works with occasionally.

“He is confident as hell.” -Malik Rosier

It was such a quick answer to the question. He chuckled about it. I think it is also true. Van Dyke might have been more reserved about the outward expression of it but the confidence has always been there. It took some stones to call out NC State last year. Most people wouldn’t give bulletin board material to a top five defense especially after starting the season 2-4. TVD isn’t most people though.

Malik Rosier went deep often for Miami and led the ACC in average depth of target this season. pic.twitter.com/8ihanFJ883

When rounding out the rest of the quarterback room, the former Miami gunslinger had this to say about Jake Garcia and incoming freshman Jacurri Brown. Read The Case for Jacurri Brown article here. After praising Jake Garcia’s intangibles and wanting to be a better leader, Rosier touched on Brown. There was no issues in his mind about the true freshman’s athletic ability.

“Jacurri is a freak of nature.” “That kid could be the next superman.” -Malik Rosier

His ability reminds me alot of @RGIII 👀

On the technical side of things there was a question I posed to Rosier that was as much investigative as it was curious. I gave Rosier only one option. He had to pick one offensive personnel grouping for this year’s team. Malik is a smart guy. He knows offense. So when he picked two tight end sets (12 set personnel) over having multiple wide receivers, it was note worthy.

Here is a former University of Miami quarterback who is in cahoots with the current. If you are associated with the program in anyway you understand the strength the tight ends give you this year. Will Mallory, Elijah Arroyo, Kahlil Brantley, Dominic Mammarelli and freshman Jalil Skinner round out a very deep and talented tight end group.

The tight end pick also insinuated that the questions at wide receiver are still there. Someone at that wide receiver group desperately needs to step up. The Hurricanes could have a very successful season this year but if it is going to do so, it needs to mitigate the holes. Who will be WR1 is a hole.

On to the two deep discussion on offense. Scoop thinks TreVonte Citizen will see little to no burn while Toast and myself think Scoop is nuts. But my cohort who is on the losing end of the numbers game has numbers to his advantage. The running back room is deep. It is the deepest it has been in years, maybe in a decade. A healthy Don Chaney Jr. and Henry Parrish who transferred in from Ole Miss give you numbers you didn’t have last year.

I get it. The fans in us come out and there is always this affinity for the shiny new toy. Citizen is definitely shiny. His physique isn’t that of your typical 17 or 18 year old freshman. He looks the part and then some. I still think hedging my bet and saying special teams could be an option for the young running back means Toast and I will win the argument. 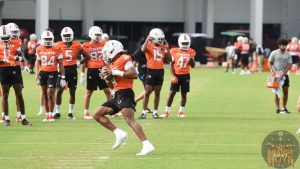 Running Back Jaylon Knighton getting in reps early in camp

I don’t even remember a single question of five questions so I can’t provide commentary there this week. Hillary Clinton facts didn’t make an appearance so that is good. The “Watchlist” will go down for me as the show we started streaming live again, Malik is back and sensory overload. My mind always has this propensity to wander naturally so having the live aspect with a group chat going on and I think I missed about 40% of what Scoop said.

It isn’t necessarily a bad thing. It’s just like being in a long time relationship where you get selective hearing. I cannot believe the season is inching closer and closer upon us. This is the time of year where you see jersey numbers online that signify how many games until season starts. We are in the teens now.