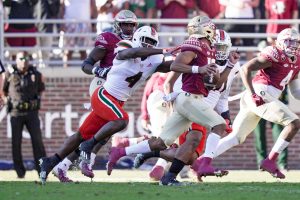 Is this finally the year that the Florida State Seminoles finish above .500?

That is the question most college football fans are asking themselves as the start of the 2022 season inches closer. The once proud program has definitely hit a rough spot following their choice to back a booster over a National Title winning head coach in John James ‘Jimbo’ Fisher Jr. For those not keeping score at home, the Seminoles told Jimbo to kiss their ass when he expressed a need for the school to invest more in the facilities. As a result, he left following the 2017 season and the Seminoles are a combined 19-27 and have not finished at, or above, .500 since.

Can head coach Mike Norvell turn this around this year?

A betting man would tell you ‘Hell No’. Mike is 8-13 over his two seasons and with all due respect, this year isn’t looking a whole lot better. The current roster is average at best and their 2023 recruiting class is hovering awfully close to the ‘load more’ option on the ranking sites. Any person that would invest anything more than lunch money on a flier bet for this squad I would label as an outright idiot! Listen, it’s not like Norvell has some track record of turning around once proud programs and returning them to previous glory. He was hired after leading Memphis to a 12-2 record in the mighty, mighty American Athletic Conference. They beat three ranked teams that year: SMU and Cincinnati twice. They lost to Temple and had 53 put on them in a Cotton bowl loss to Penn State. His overall record? 38-16 over four seasons and 0-4 in bowl games.

Have you ever seen a better resume?

Yes, actually many to be honest…

Florida State is in this mess for one reason and one reason only…hubris.

The hierarchy at FSU had a firm belief when they let John James walk out the door to Texas A&M, that FSU was too big to fail. They believed that FSU made Jimbo and FSU will make the next guy we hire, Hi Willie! Obviously, FSU is now learning how badly they miscalculated. They are not too big to fail. In fact, they appear to be the perfect size to fail. Four straight losing seasons, their first ever loss to a FCS team and a 2023 recruiting class number that would make you clinically obese if it were a waist size. That’s the state of Florida State football right now.

But it gets better. Why? Because FSU can’t do anything about it.

They are poor. I’m not talking ‘can’t afford to go out to the movies’ poor, no, I’m talking ‘can’t afford toilet paper’ poor. They hired a new Athletic Director who was promoted from president of their booster club and who’s major accomplishment thus far has been upgrading the urinals at Doak Campbell Stadium, also known as the largest brick trailer park in the country. The cold hard reality is, if not for Manny Diaz being a bonehead, Miami is on a five-game winning streak against their rival from the north. 4th & 14 is literally the best thing to happen to FSU’s program in four years. It’s the only highlight!

So, to sum up, there’s a better chance of me going through the night without having to get to pee three times than there is of Florida State doing anything worthwhile this season and that includes finishing above .500.

Until next time, I’m I.P. Daley saying…how do you get to Tallahassee from Miami? North ‘til you smell it, west ‘til you step in it.

Editors Note: At the time of writing FSU’s class was at #47. Presently it has improved and would no longer classify you as obese if it were your waist size. Regardless, they will still suck and lose to Miami by at least 30.

About the Author: I.P. Daley

Irving Paul Daley is the resident Ombudsman for the OBB Legend. A noted figure in the college football world, I.P. has mentored some of the finest sports journalists not presently on ESPN. His encyclopedic knowledge of the sport will allow him to bring a viewpoint that is too often shunned in today’s media; a white, nonagenarian from the northeast. I.P. works out of his beachside condo in East Boca with his wonderful wife of 67 years, Margaret.