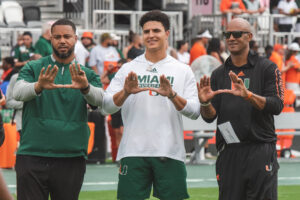 The Miami Hurricanes’ football program has undergone a lot of change over the past nine months; starting at the top of the athletics program with a new AD, to a new head coach in Mario Cristobal, to the advent of a new role within the program for Alonzo Highsmith. I will focus on another area within the program that has undergone a lot of change as well and that is on the defensive line. Coach Cristobal identified quickly that the defensive front needed upgrading and moved aggressively to change that: bringing in five players from the transfer portal who should all see significant playing time this season. What do the numbers show for Miami’s defensive line as we head into the 2022 season?

The results are limited to players who played significant snaps in 2021 and the data they produced. This limits our dataset to the players who played a representative sample, while also playing those snaps in competitive situations. The pressure rate you bring against Bethune Cookman is not represented in this exercise etc. As such, I am looking at players who had at least 100 pass rushing snaps for their team.

To bring in a level of context, I am looking at the top-25 defenses represented in Football Outsiders public metric Defense Fremeau Efficiency Index (DFEI). This metric seeks to represent the per-possession scoring advantage each defense would be expected to have on a neutral field against an average opponent.

Defenders who played at least 100 pass rush snaps for the top-25 defenses pressured the QB on an average of 9.0%, while Miami’s defenders came in at 7.9%. Considering Miami ran an upfield one-gap system, this is a poor result.

Edge defenders among this dataset averaged a pressure rate of 11.3% last season, whereas only Zach McCloud managed to reach this mark (13.3%). Interior DL averaged an 8.6% pressure rate and no Miami Hurricanes’ interior DL reached this mark. Miami was led by Nesta Silvera inside (8.0%).

Here is a graph showing the pressure rates for all Miami Hurricanes defenders with 100 pass rush snaps. It stands out that three of Miami’s top four pass rushers are gone from last season. You can also a need to move away from asking Jordan Miller to rush the passer this often in 2022.

In examining the data, it stands out that Miami asked their front to line up in 5-technique (head up on an OT) only 153 times, while asking them to line up as a true edge player (7-technique or 9-technique) a whopping 1,604 times. Additionally, Miami asked their front to use a NT only 199 times, while using a 3-technique DT on 1,290 snaps. Miami’s alignment on defense was designed to get as much pressure as possible to create chaos on the LOS and still had underwhelming pressure percentages to show for it.

Coach Cristobal has spoken many times about the need to get stronger and more physical up front and the data for the players brought in as transfers bears this out. Antonio Moultrie alone played more snaps as a 5-technique last year (154) than the entire Miami front did combined (153). In total, the four defensive line transfers combined to play 490 snaps as a 5-technique and 350 snaps as a NT. Akheem Mesidor was tasked with playing an undersized NT role for West Virginia on 267 snaps last year, yet he still managed to produce 33 pressures and a pressure rate of 9.9%. Both of these figures compare favorably to the great 2018 season by Gerald Willis (26 pressures and an 8.7% pressure rate).

Miami has reshaped their DL room to be a longer, stronger, more physical unit capable of playing an odd front (3-4), which asks the two down linemen on the ends to play a 5-technique much of the time. A 5-technique DL will be lined up “head up” over the OT, or directly in the middle of the OT’s body. When you read about a defense wanting to be “multiple” often times they are referring to the ability to play both a 3-4 or 4-3 alignment with their defensive front. Miami now has the personnel to do this.

The reason it is important to note the high number of snaps taken in 5-technique and NT alignments is that you will see much lower pressure rates from these techniques as the goal is to occupy blockers to free up your standup rushers to create pressures and sacks.

Caleb Johnson should play a large role at ILB this season and he will bring excellent data to the pass rush as well, as he pressured the passer on 19.1% of his pass rush snaps but did not meet the 100 snap threshold to be included in the data above.

Missed tackles were a big story in 2021 for Miami’s defense and the DL was no exception, as the top nine defensive linemen missed a total of 42 tackles on their own. That’s more than any top-25 defensive line missed.

While pressure rate alone explains nine percent of a teams’ win total (linear regression r^2), a teams’ DL solo tackle percentage explains 18 percent of a teams win total. Essentially, a solo tackle along your DL is much more impactful than a tackle by a LB or DB and is almost always an impactful play for the defense. Among interior DL who played at least 100 run snaps last season, here are the solo tackle percentages for the top players:

Darrell Jackson was a true freshman playing in the Big 10 and is amongst the very best run defenders in the nation. Nesta Silvera also fared very well in this metric but was allowed to shoot gaps from his alignment, while Darrell Jackson was asked to line up as a 5-technique 125 times last season. The data supports a very bright future for Jackson.

Expect to see Miami’s run defense be much improved and more impactful this season, as the DL boasts multiple top-notch solo tackle percentage players this season.

In 2021, Miami ran a defense that was predicated on shooting gaps and creating chaos at the LOS, but lacked the talent along the DL to win consistently. Even with the benefit of minimal gap responsibility Miami’s DL lagged behind the top-25 defenses in virtually all playmaking defensive metrics. Coach Cristobal quickly identified this area of the team as a significant weakness and used the transfer portal to add length, experience, and talent along the defensive front. The depth at edge and interior DL allows Miami to be more versatile and to defend the run in more effective ways without sacrificing the pass rush.

As you would expect, the best defenses have more effective depth along with the defensive line and can afford to play more players at the position for a large number of snaps. Alabama, Georgia et al played at least nine players at least 100 snaps against the run and pass last season, while teams like Cincinnati only played six this many snaps. Serving to highlight some of the injury luck that teams like that need to be truly successful. This season, with the transfers and freshman additions, Miami has the ability to play 10+ defenders along the defensive line at least 200 snaps and should offer some injury and/or production insurance for the team.