Kevin Steele is a football lifer. For over four decades, Steele has been involved in the sport in some fashion. His latest gig is that of defensive coordinator for the Miami Hurricanes. Based on his track record, this seems to be a home run hire for Mario Cristobal.

A couple of weeks ago at the media day, Steele said a few things that gave a window into just what type of defense UM will have during this 2022 season.

Here are a few things that were particularly eye-opening…

“Tell me who the quarterback is, tell me what personnel they feature (and I’ll tell you what we run).”

It’s very simple, Steele’s system is flexible and he will adjust it based on the particular offense they are facing. Back in 2019, while running Auburn’s defense, he ran a seven defensive back alignment that for the most part kept Joe Burrow and his NFL fleet of wide receivers in check. Auburn held LSU to a season low 23 points (no one else held them under 36 during that historic season) 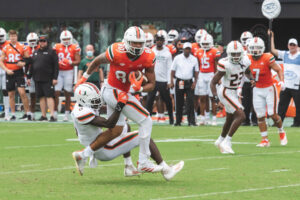 Alright, anyone wishing for Agent 0 to be moved to linebacker, well, Steele nipped that in the bud. However, if you read between the lines it’s evident that Williams will be used like the queen on the chess board depending the situation. It wouldn’t surprise me to see alignments with Avante Williams, Kam Kichens and Williams ( a ‘jumbo nickel’, which is three safeties on the field) at certain points.

“You’ve got to minimize the times you have one-on-one tackles, because when you miss tackles in a season, and you take a cut-up — and I have watched for every team I’ve been on, this team included — and you watch that, you’d be surprised at the percentage of missed tacklee, it’s one guy. It’s a one-on-one tackle.”

There’s no doubt about, things like leveraging the ball back inside, backside pursuit, and getting as many helmets near the ball will be stressed by this staff. Tackling will be a group effort on all three levels of the defense.

Steele explained that with today’s tempo, and higher number of plays per game, it’s imperative that you have more than one set of ‘starting’ defensive lineman will have to be utilized. Miami went heavy into the transfer portal to fortify this room in the off-season. Look for at least 10 guys to consistently get snaps this fall.

They may not have a Cortez Kennedy or Warren Sapp upfront, but there will be strength in numbers with this unit.