Canes Kick Off 2022 Season with a Draw 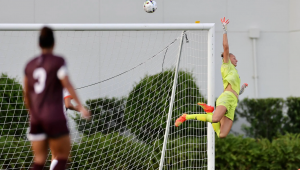 The University of Miami soccer team kicked-off their 2022 season at Cobb Stadium with a 0-0 draw against Mississippi State. They were lucky. Senior goalkeeper Melissa Dagenais picked up where she left off last season and showed why she might be the best GK in the ACC as she made 11 saves, a few of which were flat out robbery. The Bulldogs came out and dominated the first half and absolutely deserved to go into the half with a lead, but Dagenais wasn’t having it. The save of the game may have been in the 28th minute where Dagnais The Great made a leaping save to stop a ball destined for the upper right corner of the goal. In total, the Bulldogs managed 16 shots in the first half.

Credit to HC Sarah Barnes and her staff as they definitely made some nice adjustments at the break and Miami certainly looked much better in the second half. While Dagnais The Great was doing her thing to absolutely drive the Bulldogs mad, the Canes attack began to put some sustained pressure on Mississippi State’s defense. It culminated with the Canes best opportunity to score in the 85th minute when Taylor Shell was able to get free and send a beautiful cross in front of goal that was just a touch to high for Jackie Koerwitz to head in for the winner.

Next up for the Canes…Alabama come to Coral gables on Sunday. Match is set for 5p and can be watched on ACC Network Extra.