The Miami Hurricanes will roll out a new defense under Kevin Steele. It starts up front. The trenches are what win championships and there is a reason why the NFL pays so much money for defensive ends. The Miami Hurricanes have had a recent string of success at defensive end in the NFL draft with Jaelan Phillips, Quincy Roche and Buffalo Bill first rounder Gregory Rousseau.

The defensive line will have two key on the field additions in coaches Rod Wright (Defensive Ends Coach) and Joe Salave’a. (Defensive Line Coach/Assistant Head Coach) You also cannot forget the fact that former NFL Pro Hall of Famer Jason Taylor stoically patrols the practice field as an analyst. The coaching staff at Miami has improved tremendously, the defensive line is notably where it has improved the most. 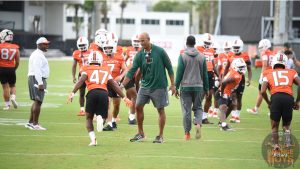 Miami has added a few new transfers to the position group who look to factor in a big way this season. Coupled with some key returnees, the Hurricanes could have some unsung heroes at a position with some depth.

Jahfari Harvey is a fourth-year redshirt sophomore from Port St. Lucie Florida. Standing in a 6-4 252 lbs. Harvey saw action in all 12 games last year totaling 26 tackles, 6.5 tackles for a loss and added 2.5 sacks to his resume. Against North Carolina on Oct 16. Harvey had a remarkable play that exploited his athletic talent. His 33 yard pick-six was the first score by a Miami defender since 2018. Harvey has been making some noise in the off-season and has the tools necessary to be a core pass rushing option. Look for Harvey to be in heavy rotation this fall.

Miami edge rusher Jahfari Harvey deflects the pass and takes it himself, cruising in for the score.

The Hurricanes have a strong recent track record at EDGE when it comes to the draft. Could Harvey eventually be next?pic.twitter.com/PiscslORpd

Chantz Williams is a 6-4, 255 pound third-year sophomore from Oakleaf high school in Jacksonville, Florida. In his second year at Miami, the defensive end was a rotational player and saw action in 12 games. Amassing 17 total tackles (nine solo) and finishing with 2.5 sacks, Williams has the frame and skillset to matter. His first career sack came against the Alabama Crimson Tide which also netted in a turnover. Williams also has the athletic ability to patrol the flats in addition to his relentless pass rushing pursuits. Defensive Coordinator Kevin Steele likes options and Williams gives you exactly that.

Ahkeem Mesidor spent his first two season at West Virginia and played primarily as a defensive tackle last year. The 6-3, 280-pounder has now shifted outside for the Miami Hurricanes and will be a formidable force off the edge. In two seasons with the Mountaineers he totaled 70 tackles, 14.5 tackles for loss and 9.5 sacks. Mesidor can take over games. In his season opener vs. Maryland last year, he finished with nine tackles and a season-high 1.5 tackles for loss. A True Freshman All-American First-Team selection in 2020, Mesidor’s name will be well known to Miami fans by the end of the season. With his size and tenacity, the former mountaineer can easily play outside in a 4 or 4i technique allowing the Hurricanes to shift into odd man fronts seamlessly.

Mitchell Agude is a sixth-year redshirt senior who played his previous two season at UCLA. The former second-team All-Pac 12 selection had 54 tackles, two sacks and 6.5 tackles for loss. Agude was a main stay for the Bruins and started 10 of 12 games in 2021. His best game last year was when he faced his California rival. Agude had a career-high ten tackles in a win vs the USC Trojans. At 6-4, 240 pounds, the newly acquired transfer defensive end has a very quick first step and can also set the edge outside as a run defender. Look for Agude to have one of the more meaningful roles on a defensive line that is amounting quality depth with transfers.

Elijah Roberts is a third-year sophomore from Columbus high school. The 6-4 275 pound monster saw action in nine games last year. Roberts finished the 2021 campaign with eight tackles and made his career debut in 2020 as a true freshman when Miami pounded FSU 52-10. A consensus four star prospect out of high school, Roberts chose Miami over Florida, Florida State, Michigan, Nebraska, North Carolina, Tennessee, and an Oregon squad that was coached by Mario Cristobal. 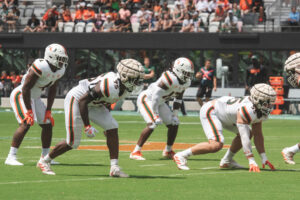 Thomas Davis is the 6-2 220 pound redshirt freshman from Lowndes high school in Valdosta, Georgia. Although suffering from injury last year, Davis was getting first team reps this spring. Davis was rated the 39th best player in Georgia regardless of position by ESPN. Davis chose Miami over offers from Arkansas, Florida State, Mississippi State and South Carolina among others.

Jabari Ishmael has the size at 6-5 and 245 pounds to be a rangy and effective option at end. The redshirt freshman from Columbus high school in Miami saw action in only one game last year for the Hurricanes. Out of high school, the consensus four star prospect was rated number 197 on the ESPN300 and led Columbus to a state title as a junior. Ishmael has family ties to the Hurricanes and is the son of Miami strength and conditioning coach Victor Ishmael. Chose Miami over offers from Florida, Florida State, Michigan, Notre Dame, Ole Miss, Penn State and Tennessee among others.

Cyrus Moss fell in love with Miami after his high school coach told him to visit. The 6-5, 215 pound freshman from powerhouse Bishop Gorman in Las Vegas, Nevada was a consensus four star and was selected to play in the 2022 All-American Bowl. The 75th best player in the nation according to the ESPN300 and the number one player in Nevada, Moss is that dude. He had offers from everyone. The long, quick and rangy Moss chose Miami over Alabama, Clemson, Notre Dame, Oklahoma, Oregon and USC among others. Moss saw action in the Miami spring game and the future of the position is bright with the likes of him.

Nyjalik Kelly is now listed at 6-4 and 240 pounds. The true freshman from Dillard high school in Fort Lauderdale, Florida is exactly the type of recruit you want at defensive end. The prototypical framed Kelly was ranked the 119 best player in the country regardless of position by ESPN and the 12 best player in the state of Florida. Teammates have raved about his physique and state he does not look like your typical freshman. Kelly had offers from Auburn, Clemson, Georgia, LSU, Michigan, Oregon and Texas before picking the Hurricanes on signing day.