Canes Get First Win of Season 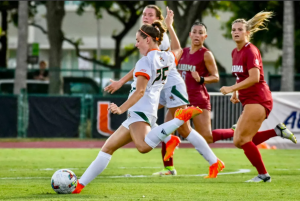 The Miami Hurricanes grabbed their first win of the season and stayed undefeated as they edged Alabama 1-0 for their second straight shutout to start the campaign. While the Canes were once again out shot, they have a weapon that most do not…goalkeeper Melissa Dagnais, or as we call her, Dagnais The Great. The senior followed up her dominating performance in Match Day 1 with another clean sheet as she continues to make SEC forwards have nightmares. The Tide out shot the Canes 22-3 for the game, but only 3 of those 22 Tide shots were on target. For the Canes, freshman Megan Morgan got us on the scoresheet in the 32nd minute after fellow freshman Emma Pidding forced a Crimson Tide turnover that Julia Edwards was able to find Morgan who snuck her shot in just inside the left post. Despite being dominated in time of possession through the first two matches, the Canes are now 1-0-1 and will have their first road test on Thursday as they head to Boca to battle FAU at 7p. Hopefully the ladies can impose their will on the Owls and control the match from the outset.