The monsters in the middle. The Miami Hurricanes have had some legends at the defensive tackle position. Jerome Brown, Warren Sapp, Russell Maryland, Cortez Kennedy and Vince Wilfork were DT dominance personified. Regardless of defensive front, Miami will be relying on defensive line coach Joe Salave’a to provide the coaching spark inside. Whether head up on the center or ready to penetrate as a one or a three tech, the Hurricanes have options.

Akheem Mesidor was moved outside as a defensive end but has played defensive tackle at West Virginia. Also keep in mind, that although Gregory Rosseau was listed as a defensive end, options to slide inside are available for the Hurricanes.

Leonard Taylor is expected to be a force from the interior and was tied for the team lead of 7.5 tackles for loss last season. The 6’3″ 305 pound sophomore and Outland Trophy watch list recipient, had two sacks and finished with 21 total tackles as he flashed in his freshman campaign. Taylor had a coming out party against FSU and finished the game with a career high six tackles. 56 nightmares provides a ton of nightmare opportunities for the opposition. Everyone out of high school wanted Taylor’s services. Some services had him the number one overall DT in the country. When you beat out Alabama, Florida, Florida State, Georgia, Ohio State, Oklahoma, among others, you know you have a talent on your hands. Taylor will be in prime position to play disruptor in a Kevin Steel defense known to be multiple and aggressive.

Jarred Harrison-Hunte is a fourth year redshirt sophomore out of Middle Village, New York. JHH started eight games and was a top contributor a year ago. His ability to slither his way into the backfield was both slick and powerful. In 2021, Harrison-Hunte finished with 6.5 tackles for a loss, two sacks and 18 total tackles. In 2020, he added three sacks and 17 tackles to his resume. A consistent player during his time here so far with the Hurricanes, look for JHH to be in steady rotation this fall.

Congratulations to Miami Hurricane Leonard Taylor on being named to the Outland Trophy Watch List!pic.twitter.com/6lTOVNSyhg

Jordan Miller is a fifth-year redshirt junior from Jacksonville, Florida. The behemoth 6’4″, 320 pound Miller saw action in 11 games last year including the season opener vs Alabama where he finished with three tackles. He would finish the 2021 campaign with 19 tackles, 4.5 TFL’s and 1.5 sacks. Miller has the experience needed to anchor the line. The regular rotational Miller played in 11 games in 2020 and all 13 games in 2019.

Jacob Lichtenstein stands in at 6-5 and 270 pounds. Before representing the orange and green corner, the local boy first represented USC’s corner out west. In 2021 his final season with the Trojans, Lichtenstein finished with 28 tackles, six tackles for loss and four sacks. He obviously got the attention of Mario Cristobal last year. The former Oregon Duck’s coach had plenty of time sizing up the opposition and Lichtenstein obviously made an impression. The rangy DT had a fumble recovery in the spring game and his presence was felt all over the field. The former four star prospect by ESPN is finally home and will no doubt see a role in this defense.

Darrell Jackson, Jr. transferred in from Maryland and has been seen getting first team reps. The 6’6″ 305 pound former Terrapin could be the option to play head up over the center this year in odd man variants. Last year, Jackson made only one start in the Pinstripe Bowl vs. the Virginia Tech Hokies. Jackson netted six tackles and probably showed Maryland they needed to start him some more. Now as a member of the Hurricanes, don’t be surprised to see Jackson as a center piece in this Kevin Steele defense.

🚨BREAKING🚨Maryland Transfer (Darrell Jackson) commits to Miami! The Florida native is a big get for The Canes, as the DL is a huge position of need. At 6’5 300lbs, he gives the Canes a solid starter at DT to pair with LT56. Canes land him over in-state Rival Gators. pic.twitter.com/XsSn0PtSyF

Antonio Moultrie makes his way from UAB where he was a second team ALL Conference USA selection. Moultrie was impressive as a member of UAB totaling over 100 tackles for his career. Moultrie dominated in an Independence Bowl win over BYU, posting nine tackles and four tackles for loss. The Hurricanes have shifted Moultrie inside and look for a potential quicker speed option on the interior. Listed at 6’4″ 265 pounds, Moultrie could also play outside as a defensive end in certain looks. 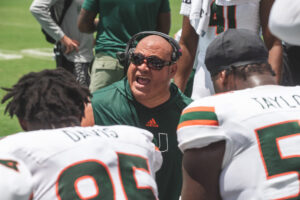 Ahmad Moten is the true freshman defensive tackle that led his Cardinal Gibbons high school squad to back-to-back state championships. (2020,2021) The 6-3 325 pounder from Ft. Lauderdale was selected to the Miami Herald All-Broward First Team. Chose the Hurricanes over offers from Florida, Iowa State, LSU, Oklahoma, Oregon, Tennessee and West Virginia, among others. After the transfer depth added to the position, Moten could be a potential redshirt candidate for the Hurricanes.

Anez Cooper was a late addition to the 2022 recruiting class and looked to be someone to help fill that void I mentioned in #2 about needing a 350+ pound NT on the roster. Coach Cristobal mentioned in his Signing Day Recap that Anez wanted to play RG in college but that he could play situationally on defense. He has moved into the 2nd team RT position already and is impressing the coaching staff on Greentree. Bright future for “Big Bell.” – Roffers’ Rundown.