University of Miami Hurricane quarterback Tyler Van Dyke added his name to a pair of additional preseason watch lists. Van Dyke made both the Manning Award Watch List and the College Football Performance Awards (CFPA) National Performer of the Year Trophy Watch Lists. TVD is adding to the preseason praise party as he was previously selected to the watch lists for the Davey O’Brien Award, Maxwell Award and Walter Camp Award. That is by our count five pre-season recognitions for the reigning ACC Offensive Rookie of the year.

The Manning Award, sponsored by the Allstate Sugar Bowl, includes 30 quarterbacks across the nation.  Two Hurricanes have won positional trophies for the prestigious award: Wide receiver Leonard Hankerson and punter Pat O’Donnell were recipients of the “OMAHA” catch phrasing quarterback namesake. Tyler Van Dyke would be the first quarterback in Miami’s history to win the award as quarterback. 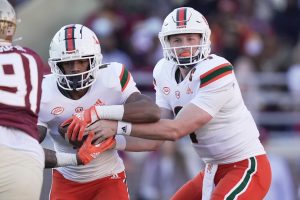 Van Dyke threw for 2,931 yards and 25 touchdowns in just ten games. Van Dyke started nine of those ten and completed 62.3 percent of his passes which was the sixth-best single-season mark in Hurricanes history, Van Dyke, is a native of Glastonbury, Conn., also became the first Power Five quarterback since LSU’s Joe Burrow in 2019 to throw for 300-plus yards and three-plus touchdowns in six straight games. Cheers to the preseason recognition TVD. The OBB NIL sponsored athlete is sure to do big things in 2022.