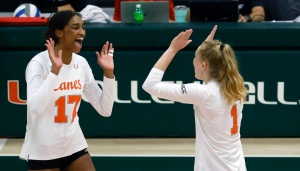 It isn’t just Miami Hurricanes football players making preseason awards lists, the volleyball team is making noise as well. With the start of the season just days away, a couple of Canes received honors as Janice Leao and Savannah Vach both saw their names on the All-ACC Preseason Team. As for the team as a whole, after finishing tied for 2nd in the ACC last season and making it into the 2nd round of the NCAA Tournament, the Canes are predicted to finish 4th in the ACC in 2022. They finished the 2021 season with the #25 ranking in the AVCA Coaches Poll.

Leao, out of New Bedford, Mass, finished #11 nationally with 1.36 blocks per set last season and led the team in blocks 18 times last season. Vach, a native of Winter Springs, FL, tallied 10.98 assists per game as she continues her march towards the top of the Canes career assists list. Presently she is second all-time with 2,879 total assists. The Canes will open their season This weekend as they attend the Hofstra Invitational in New York where they will face Bryant and Hofstra on Friday and Niagara on Saturday.