The Ruiz family has been instrumental and pivotal players in the quest for an autonomous Miami Hurricane stadium. Patriarch John Ruiz has been very vocal and a champion for improving the Miami Hurricane legacy. HKS Architects was the company that was solicited with the design of the endeavor. Dan Noble is the President and CEO of HKS Architects and has a unique perspective on design.

“Design is a way of thinking. It can uncover hidden opportunities and create meaningful change. Design done right delivers the extraordinary.” Dan Noble

HKS definitely delivered on a design which fully encompasses change. A new stadium rendering was finally issued for public consumption and any hope for a nod to the classic Little Havana cutie was quashed. The design screams modern architecture while adding mother natures’ subtleties including inlay palm trees and a gorgeous lake backdrop. A debate is set to ensue. Purists vs. the modern and forward thinkers.

The proposed site would be at tropical park located at 7900 SW 40th Street in Miami, Florida. It is essentially a stones throw from the University of Miami campus. After months of deliberation and site surveys, it might be the most feasible shot for a historic and storied Hurricane program to have a home of their own. In an interview with The Athletic, Miami Hurricane Athletic Director Dan Radakovich had this to say about a potential new site.

“Hard Rock Stadium is just fabulous. I mean, it’s a wonderful place to play, but it’s a little far from campus. You have something that’s close to campus, that benefits the entire campus community, it’s almost immeasurable. So if that’s something that can happen, we’re going to pursue it to its logical conclusion. I know it’s been tried before. But, certainly, there’s things that we can look at to try to create an opportunity if one exists for that to happen.”

To most casual Hurricane fans the premise of an autonomous Miami Hurricane stadium seems implausible and a long shot. This venture would need city and counsel approval in conjunction with unwavering Miami administration support. This would need to be privately funded through various sectors and there is bound to be a plethora of red tape along the way. So much so, you might need several pairs of scissors just to cut through it all.

You still have to try. Personally it always resonates within me to declare that the Miami Hurricane program needs its own home that replicates its historic bravado. Hard Rock Stadium is indeed a wonderful venue to see a Hurricane game but it isn’t centered around the Hurricanes. The Hurricanes are accentuated but the bones are all Miami Dolphins. Just walk around the stadium’s perimeter and look at the statues who are immortalized. They aren’t Hurricanes, they are Dolphins. 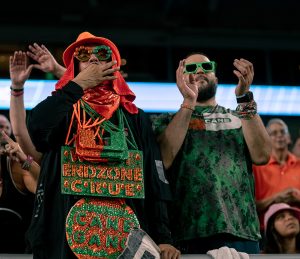 As far as the drive is concerned, it is a marginal argument at best. I have been a Palm Beach county resident making the trek for the better part of 20 years. If you think I would balk at this chance over 30-40 minutes of increased driving time then I have a bridge to sell you at Hard Rock Stadium. Build it and they will come. The product on the field will always supersede what Miami Hurricane fans are willing to do for their beloved hometown team.

I would gladly drive the extra time to watch a marquee game in a new, revolutionary, idiocentric Miami Hurricane stadium. That is exactly the one HKS just designed in the aforementioned. Envision the entrance, the boats on the lake, the palm trees, the pageantry, the whole kit and Cane caboodle. I, for one, am looking forward to the premise. At the very least, it is a good conversation to have with your buddies at your local bar drinking your favorite Tank brew. Just for nothing else but to say, “what if?”