There’s a nagging question that surrounds this years Miami Hurricanes coming into the 2022 season. While they have a marquee signal caller in Tyler Van Dyke — who will be his primary receiver? To paraphrase Rick Pitino: Michael Irvin, Lamar Thomas, Reggie Wayne or Andre Johnson aren’t walking through that door.

With the departure of Charleston Rambo (79 receptions, 1,172 yards and seven touchdowns last season) there is a gaping hole in terms of production. Reports out of Greentree Practice Field indicate that Xavier Restrepo will be consistently targeted in the slot. 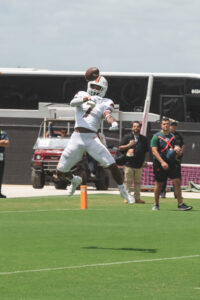 Key’Shawn Smith, the San Diego speedster is the leading returner at wide receiver in terms of catches and yards (33 grabs for 405). The assumption is that he’ll play a major role. Then the hope is that the likes of Jacolby George and/or Romello Brinson — who showed flashes last season — can step up.

But if you look back at the Michigan offense from ’21 that offensive coordinator Josh Gattis engineered, you know that their leading receiver, Cornelius Johnson, had just 40 receptions, with four others having between 22 and 38 receptions.

Now, to add some context to this, the Wolverines had a very stout offensive line (who won the Joe Moore Award), and had two rushers that had over 900 yards. They were a run-first team. Also, Ronnie Bell, who was expected to be their go-to receiver, injured his knee in the opening game and missed the remainder of the 2021 season.

The point is that while Miami may not have a true number one outside, it very well could be the case that Miami will have to do this by committee, and with the aid of a strong set of tight ends.

Last season while ‘Van Dimes’ went on a Joe Burrow-esque run down the stretch, the reality is that they put an inordinate amount of pressure on him to win games by himself. Bottom line, for the Hurricanes to have a more successful season, they will have to run the ball more effectively.

In 2021, Miami averaged 127.7 yards rushing per game, which ranked 12th in the ACC and 97th nationally. Generally the elite teams are much closer to 200. So can Alex Mirabel’s starting five, combined with a more diverse running package put in by Gattis, improve the running game, and take some of the load of Van Dyke?

Unfortunately, Don Chaney was injured in practice last week. This combined with TreVonte’ Citizen going down, suddenly the once deep Miami running back room is very shallow. As of right now, you have three scholarship ‘backs in Jaylan Knighton, Thad Franklin and Henry Parrish. 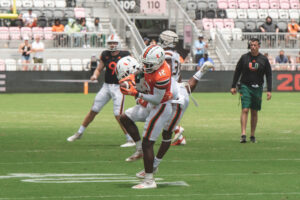 Generally, teams give the bulk of their carries to a pair of running backs, with a third who gets a few snaps during a game. But should another injury hit, then what? Some have proposed the idea of sophomore Brashard Smith, getting plugged into that position. Yeah, pass-pro could be an issue, but he’s has some thickness to him, and the explosive Smith is the type of guy you have to find ways to get the ball to. Again, just an idea.