The University of Miami and head baseball coach have come to terms with an extension to his contract through 2026. Miami Athletic Director Dan Radakovich announced Wednesday the decision to extend DiMare. DiMare finished the 2022 season with a 40-20 overall record and 20 ACC conference wins. The Hurricanes hosted a regional for the first time since 2016 and were ranked as high as second nationally last year.

“We are excited to have Gino continue to lead our baseball program-We made great strides as a program last season, including hosting a regional for the first time in six years. Gino and his staff are building momentum for Miami baseball and we are looking forward to more successful seasons to come.” –Miami AD Dad Radakovich 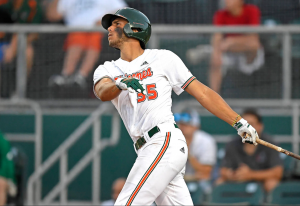 Four All-America honorees have emerged since DiMare has taken over managerial duties for the Hurricanes. Chris McMahon (2020), Brian Van Belle (2020), Carson Palmquist (2021-22), and Andrew Walters (2022). Miami also has added a plethora of All-ACC recognitions on DiMare’s watch as well.

Twelve DiMare led Hurricanes have gone on to be drafted in the MLB Draft including Slade Cecconi who was a first-round selection to the Arizona Diamondbacks. Gino’s guys have also succeeded in the classroom as well. 15 student athletes were awarded to the ACC All-Academic team and Christian Del Castillo in 2021 was an Academic All-American.

“Growing up in Miami, I feel very fortunate to have spent 27 years here with the University as a player and coach.-The University of Miami has been a second home to me and my family and I am grateful for the opportunities it has afforded me and I look forward to leading our program to Omaha.” –Gino DiMare

The University of Miami has won four baseball national championships with the last championship coming in 2001. This move should not come as a surprise as the new Miami AD has been publicly supportive of DiMare. The Hurricanes have their skip through 2026. Let us know what you think about the decision.

Head coach Gino DiMare has signed a three-year contract extension, keeping him with @CanesBaseball through the 2026 season!