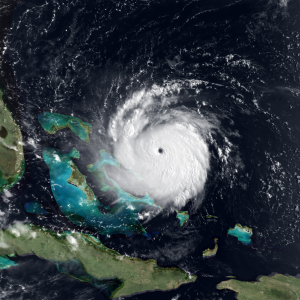 Thirty years ago today, Hurricane Andrew made landfall on Elliott Key just east of Homestead forever altering the landscape of South Florida. The Category 5 behemoth destroyed more than 63,500 homes, damaged more than 124,000 others, and claimed the lives of 65 people. The devastation it wrought was almost unfathomable at the time. No one in its path was spared including the Miami Hurricanes.

On January 1, 1992, the Hurricanes shutout the Nebraska Cornhuskers 22-0 in the Federal Express Orange Bowl in front of 77,747 cheering fans. The victory cemented Miami’s fourth national championship in nine years, the second for third-year head coach Dennis Erickson. When the team woke up the next morning, the goal for the new year was clear: defend their national title. However, in addition to their opponents on the gridiron that year, Mother Nature also had the Canes circled on her calendar.

In the aftermath of Hurricane Andrew, UM had to scramble to salvage what remained of their fall camp. They were set to open the season against the Iowa Hawkeyes on September 5. But where could they practice? The answer lied a couple hours north of Coral Gables in quaint Vero Beach.

From 1953 until 2008, the Los Angeles (formerly Brooklyn) Dodgers played their spring training games at Holman Stadium in Dodgertown in Vero Beach. Built on the site of an abandoned naval base, Dodgertown (now the Jackie Robinson Training Complex) held a special place in the hearts of many baseball fans for decades. The legendary Vin Scully, recently departed longtime broadcaster for the Dodgers, remarked in 1979, “If this isn’t heaven, I can’t wait to see what it is.” Over the years, Dodgertown has hosted several non-baseball teams including, more recently, the Montreal Alouettes in 2017. Some of you may remember Montreal’s quarterback that year: Jacory Harris.

The Hurricanes began practicing in Vero Beach just 10 days before kickoff in Iowa City. Many of the coaches and players had lost their homes to the storm. Undeterred, the team rallied and refocused on the season ahead. After their final fall scrimmage, Coach Erickson lauded his team saying, “What they did today was amazing. To come out and scrimmage like this, to hit like this, and accomplish what they did, no football team in the country could do that. I’ve never been prouder of a football team in my life.”

The Hurricanes won their first game against the Hawkeyes and every one that followed in the regular season. One missing starter for the Iowa game was senior tackle Mario Cristobal, who was still rehabbing a torn tendon but would return later in the year against rival Florida State.

Hurricane Andrew did its best to derail the defending national champions’ season before it started, but by New Year’s Eve 1992, the Miami Hurricanes remained undefeated – a perfect 11-0 regular season record. On January 1, 1993, #1 Miami would face off against #2 Alabama in a pre-BCS era national title game, but that’s a story for another day.

About the Author: Jonathan Lones