The offensive side of the football has long been compared to cars, and new offensive coordinator Josh Gattis has inherited Rhett Lashlee’s 2021 Lamborghini. If the quarterback is the driver of the car, and the skill guys are the wheels, then the offensive line is undoubtedly the engine.

The trenches. The hog mollies. The former battleground for head coach Mario Cristobal. He and new offensive line coach Alex Mirabal know that championships are forged on the front lines. The Miami Hurricanes will feature a new identity on the offensive line this season. A more physical identity, different teaching styles, and slightly different techniques than has previously been implemented on Greentree Practice Field.

The Canes offensive line returns three starters to a line that looks to improve in running the football. The spotlight will be on this new group to drastically improve their push in short yardage situations. A reason to be optimistic about improvement: in 2021, the Oregon Ducks ranked 9th in the country in power success rate according to Football Outsiders and 1st in the nation in Opponent Stuff Rate.

Yes, that is correct. Coach Mirabal and Coach Cristobal will have a physical running game coming through the smoke on September 3rd. Coach Mirabal famously stated, “I will cut off my arms and my legs before anybody considers the offensive line here to be a weakness.” Canes fans should believe him.

“I will cut off my arms and my legs before anybody considers the offensive line here is a weakness.” Alex Mirabal

You know Mario’s taking trenches seriously 💯 Mirabal’s the best in the business! “I will cut off my arms and my legs before anybody considers the offensive line [at the University of Miami] to be a weakness.”

Zion Nelson is a 6-5 and 316lb fourth year junior out of Sumter High School in Sumter, SC. He earned the starting left tackle position as a true freshman and went on to start all 13 games in the 2019 season. In 2020, he saw game action in 10 games and started 7 games, including the final 6 of the season. In 2021, he started all 12 games at Left Tackle and earned All-ACC Honorable Mention recognition. Zion Nelson has also been recognized by being selected on the 2022 Outland Trophy Watchlist which is awarded to the nation’s best interior lineman. He looks to be the leader of the offensive line in 2022, and potentially hear his name called early in the NFL draft.

Congratulations to Miami Hurricane Zion Nelson on being named to the Outland Trophy Watch List! pic.twitter.com/6lTOVNSyhg

Jalen Rivers is a 6-5 and 325lb third year freshman out of Oakleaf High School in Jacksonville, FL. A highly touted consensus 4-star prospect that chose Miami over the likes of Florida, Georgia, Alabama, and Florida State. As a true freshman in 2020, he saw game action in seven games. In 2021, he emerged as the starting left guard but an injury set him back and he was medically redshirted. Mario Cristobal has publicly raved about the “rare” talent and versatility of Jalen Rivers. In 2022, he projects as an integral piece of the offensive line.

Jakai Clark is a 6-3 and 305lb fourth year junior from Grayson High School in Loganville, GA. As a true freshman in 2019, he started all 12 games at right guard. In 2020, he saw game action in 11 games and started 10 games at left guard. In 2021, he started the final 9 games of the season at center where he excelled and served as one of the team’s anchors on the offensive line. QB Tyler Van Dyke recently praised the intelligence of Jakai Clark noting, “it starts with Jakai… I can really trust him.” Jakai Clark has been named on the Rimington Trophy Watchlist which is annually awarded to the nation’s top center. 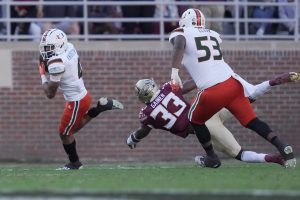 John Campbell, Jr. is a 6-5 and 320lb fifth year redshirt junior out of Dr. Phillips High School in Orlando, FL. In 2018 as a true freshman, he saw action in 4 games and was athletically redshirted. In 2019, he saw game action in 11 games and made two starts at right tackle. In 2020, he made 4 starts on the offensive line at left tackle. In 2021, Campbell, Jr. did not see any action as he was recovering from surgery on his leg. In 2022, he looks to make a big step forward as someone who has greatly benefited from time in the weight room and training room during 2021. Mario Cristobal has publicly stated, “ We expect John to be one of the best lineman on the team and in the country.” John Campbell, Jr. is another member of this offensive line room that look to greatly benefit from the new offensive line staff. We would not be shocked to see him take a major step forward in 2022. 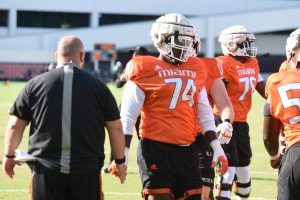 Some names to keep an eye on as the season progresses are transfer portal additions from Oregon Logan Sagapolu & Jonathan Denis, and the UNLV transplant Justice Oluwaseun. Those three are set to battle for their respective spots on the new look offensive line as the season takes shape. We expect them to contribute as physical swing men that can plug and play where injuries may arise.

Anez Cooper is a 6-6 350 pound behemoth who recently made waves in practice and could be seen also on the defensive side of the ball this year. Cooper held offers from Auburn and Georgia before selecting Miami on signing day.

Welcome to The U, Anez Cooper! pic.twitter.com/MV7fxZ3blB

Ryan Rodriguez the 6-2, 275 pound redshirt freshman shares something with the head coach. They both attended Columbus high school. The former Columbus high school grad was ranked the number sixth center nationally coming out of high school by ESPN. Chose Miami over offers from Louisville, Ole Miss, Syracuse, Wake Forest and West Virginia, among others.

Michael McLaughlin is 6-7 300 pounds and played in one game last year vs. Central Connecticut State. The redshirt freshman rated in the ESPN 300, the former four star recruit definitely has the length necessary to be a tackle of the future. Chose Miami over offers from Boston College, Florida State, Ole Miss, Pitt,  Vanderbilt, Virginia, Virginia Tech, Wake Forest and West Virginia, among others.