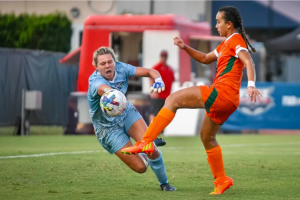 The Miami Hurricanes Soccer team is off to an amazing start to the 2022 season. For only the third time in program history, the Canes have opened with three consecutive shutouts after a 0-0 draw in Boca last night against FAU. The Canes (1-0-2) played well defensively as senior stopper Melissa Dagenais, or Dagenais The Great as we call her, stopped all six shots on target.

“Front to back, I thought we defended well,” Miami head coach Sarah Barnes said. “Every single person who came into the game gave us good moments. We can always get better, but there are a lot of positives to take away against an aggressive offensive team. For us, it’s about raising our level on the offensive end, getting more production.” –Melissa Dagenais

While the backend was solid, this Canes team is still having issues offensively which is highlighted by the fact they’ve only scored 1 goal through three matches. FAU spent most of the game on their front foot as evidenced by the wide corner disparity of 9-2 in favor of the Owls. Next up for the Canes will be a visit from UNF set for Sunday at Cobb Stadium. Hopefully gaffer Sarah Barnes can come up with some solutions to help spur the Canes attack and get some offensive momentum going before conference play opens up.