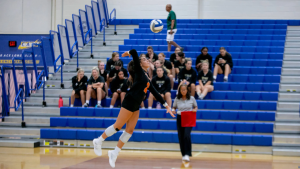 The Miami Hurricanes Volleyball Team is 3-0 after heading up to Hempstead NY and sweeping away the competition at the Hofstra Invitational. It’s only the third time in program history the team has opened a season with three straight shutouts. Sunday’s final match was arguably Miami’s easiest of the weekend as they managed an impressive .405 hitting percentage. While no Canes hit double digit in kills, nine different Canes tallied at least one.

When we tell you the Canes came out and dominated, we’re not kidding. They opened the first set with a 12-0 run on their way to a 25-7 win. They followed that up with back-to-back 25-13 wins to close out the sweep. After the match, head coach Keno Gandara praised his squad. “We were able to work on some areas of our game and getting to see everyone compete is always nice. We’ll never apologize for winning.” Next up the Rebel Challenge in Las Vegas this Friday.