The Battle of the Mind – Expectations vs. Reality 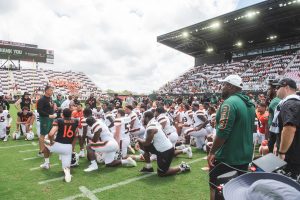 Canes fans….we’ve had one hell of an off-season. After months of waiting, it’s finally here.  IT’S GAME WEEK!

As our Miami Hurricanes begin their season versus enemies across the College Football landscape, I think it’s time to have this important conversation about the enemy of all Fandom – managing expectations vs. reality.

William Shakespeare is quoted as saying, “Expectation is the root of all heartache”. I don’t think there is a statement that better defines being a Miami Hurricanes fan over the past 20+ years. As the season approaches, the schedule predictions are being seen all over the timelines, ranging from 7 wins all the way to 12/13 wins. I am not here to bore you with my schedule prediction (*whispers* 9-3) but I think it’s important to give this upcoming season some context.

Let’s turn back the clock to January 2, 2019 and the introductory presser conference for Manuel Alberto Diaz II. Diaz was the Defensive Coordinator during the tenure of previous head coach Mark Richt.  At the end of the 2018 season, Coach Richt announced his retirement and Diaz was destined to become the head football coach for Temple University. In an act of desperation (and absolute laziness), Diaz was hired to become the head coach of the Miami Hurricanes.

Manny Diaz, a Miami native and a Canes fan growing up, was seen as a savior for the program. A guy who “gets it”. A coach who “saw The U play in the OB”. But the reality was that he was in over his head and his tenure was mediocre, at best, with a 21-15 overall record and 16-9 in the ACC.

The 2021 Miami Hurricanes were the posterchild of the Manny Diaz tenure. The Canes came into the season ranked in the AP Top-15 but stumbled out to a 2-4 record, which included a Nationally televised loss to Alabama where the team didn’t even show up, squeezing out a two-point victory against Appalachian State and an embarrassing loss to Michigan State, both at Hard Rock Stadium. The crescendo was a loss at Doak Campbell Stadium to a horrible Florida State team.  In a play that’s amorously monikered “4th and 14”, Diaz’s Miami tenure was ended by his alma mater. The 2021 Miami Hurricanes lacked accountability, discipline, and the will to be tougher than their opponents. And let’s be real, the universe would not have let an FSU grad bring Miami back to glory.

Fast-forward to today, as the Mario era begins, let’s try to remember where this team was last season. Coach Mario Cristobal is not Superman. Coach Cristobal inherited a team that needed a complete culture change and needed to be whooped in to shape, physically and mentally. Let’s remember this when we’re yelling “THE U IS BACK” from the top of the Tropical Park hill or making our 15-0 / CFP Championship predictions. Let’s remember that this team has had a history of being embarrassed in nationally televised road night games if we lose to A&M on September 17. Rome wasn’t built in a day.

This is a season of transition. There will be a lot of improvements. This staff is too good for there not to be. This team will be tough and physical. This team will be fundamentally sound on defense. But there may also be some times (not many, I don’t think) where they revert back to looking like last season’s squad. It’s going to take a full season to get this team to look like what Mario Cristobal wants it to look like. What Miami Hurricanes football needs to look like.

I am going to end this article with a quote from one of my favorite philosophers, Terrell Owens, “If you align expectations with reality, you will never be disappointed”.