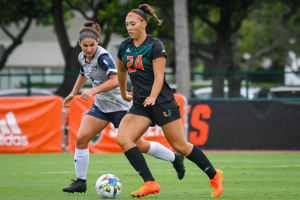 The University of Miami Soccer Team continued their undefeated start to the season with a 1-0 victory over North Florida at Cobb Stadium Sunday. For the first time this year, the Canes were able to play on their front foot for the majority of the match while keeper Melissa Dagenais kept her fourth consecutive clean sheet. The Hurricanes were able to score early in the second half when the Hurricanes press paid dividends. Jackie Koerwitz was able to pick a UNF defenders’ pocket as they were trying to play the ball out of their third and she nestled it in the left corner of the goal. The Canes out shot their opponent for the first time this season while also holding a huge edge in corners taken. Up next, Miami welcomes FIU to Cobb Stadium this Thursday at 7p for the Backyard Battle!