The University of Miami had the 11th ranked passing defense in the ACC last year. Jahmile Addae was called upon to make an impact. Besides being known as a hellacious recruiter, Addae won a national championship as a member of the Georgia Bulldog staff. The Hurricanes would gladly take the Bulldog’s eighth best unit in terms of interceptions from a year ago.

Marcus Clarke recently entered the transfer portal and is no longer listed on the Miami Hurricane roster. Clarke finished his Hurricane career with two interceptions, four pass breakups and 29 tackles. Despite the recent attrition, Miami has some depth. The Hurricanes added some quality transfers coupled with recruited young guns. This group should improve. 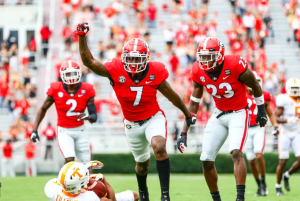 Tyrique Stevenson is undoubtedly cornerback one. The fourth-year junior is now entering his second season as a Hurricane. The All-ACC Honorable Mention recipient took his 6-0 foot 214 pound frame and started ten games last year. Stevenson finished with 43 tackles and 2.5 tackles for a loss. He was all over the field vs Alabama in last season’s opener. With a team-high nine tackles, Stevenson definitely made his impression felt. His lone interception on the season was against Kenny Pickett at Heinz Field. The rangy Hurricanes defender was able to undercut the route and break out the chain. (Since Retired) The former high school All-American started his career in Athens before making way to Coral Gables. If the Miami Hurricanes have a resurgence from the cornerback position, Stevenson will be one of the biggest reasons why.

Jordan Addison was wide open for a TD on the other side but Kenny Pickett throws an INT in double coverage. Tyrique Stevenson with the Interception. pic.twitter.com/O87fXyzD4t

Al Blades Jr. missed the bulk of last season due to health issues. The now classified fifth-year redshirt junior brings a Canes pedigree like no other. 6-1 and 188 pounds of it. Blades saw action in all 13 games his sophomore year including seven starts. As a junior he was the first ever Hurricane to wear the turnover chain (again since retired) in a road win vs top-20 Louisville. The Hurricane secondary has to be intrigued with a finally healthy Blades patrolling his side of the field. In camp, Blades was also seen at the safety position. It is not outside the realm of possibility in a Kevin Steele defense that Blades will be used in a myriad of ways.

DJ Ivey is entering the 2022 campaign as a fifth-year senior. He has always had the size standing in at 6-1 and 195 pounds. The former South Dade attendee from Florida City saw action in all 12 games last year. Ivey started four times and ended last season with 25 tackles and one sack. He was not credited with an interception in 2022 however he did lead the team in interceptions (3) in 2019 as a sophomore. Ivey has garnered a lot of positive praise from the coaches and had a solid camp. Is this the year where Ivey puts it all together and seizes the moment on the field? Stay tuned.

Darryl Porter Jr. was a mountain man before trading in his West Virginia tag for Miami swagger. Number five in the program stands in at 5-10, 185 lbs. and is a native of Fort Lauderdale, Florida. The former American Heritage standout finished last season with 46 tackles, one interception and five pass breakups. Son of former Boston College star and NFL alumni Darryl Porter, Porter Jr., is now home.

Sean Mahone, Daryl Porter Jr. and Alonzo Addae are all good players in the secondary. Here Porter gets the interceptions against TCU. pic.twitter.com/GJ2KHFRSEN

Malik Curtis has a particular set of skills. The true sophomore racked up 47 passes, 726 yards and eight touchdowns as a senior wide receiver in high school. The electric Curtis stands in at 5-11 and saw action in eight games last year. ESPN had Curtis rated the number 84th cornerback in the country. Also touting a Boston College offer out of high school, the Hurricanes triumphantly landed the services of the speedy Curtis. Besides opportunities in the defensive back field, look for his role on special teams to continue, expand and improve. Curtis was former high school teammate of current incoming freshman Chris Graves Jr. at Bishop Verot.

Te’Cory Couch is a perfect candidate standing in at 5-10 and 170 lbs. to be the Hurricanes primary nickel corner. The former Chaminade-Madonna high school standout saw action in all 12 games and made six starts. Couch led the Hurricanes last season with five pass break ups. You add his 37 tackles to the mix, Couch is a willing tackler and a tenacious option vs. the slot. Couch saw action in 13 games as a true freshman and 11 games as a sophomore so he has the experience necessary to factor. The former ESPN 300 rated recruit had an extensive offer sheet. In the end, Couch chose the Hurricanes over offers from, LSU, Michigan, Louisville, Ole Miss and Tennessee among others.

Isiah Dunson comes in at 6-1 and 186 pounds. The third-year sophomore saw action in 10 games but primarily as a special teams player last season. As a freshman in 2020, Dunson saw action in nine game and finished the season with six total tackles. Two of those came in the 52 to 10 beat down of Florida State at Hard Rock Stadium. The Georgia native and former Tucker high school consensus four star prospect chose the Hurricanes over those same Seminoles, Louisville, Nebraska, South Carolina and Texas.

Chris Graves Jr. just made waves on episode 36 of the Orange Bowl Boys because the reports have been that Graves has looked the part. Do not be surprised to see the young freshman assimilate into the rotation according to Scoop Martell. The consensus four-star prospect was listed as the 30th best athlete in the nation by ESPN. Another two way player in high school, Graves played wide receiver and cornerback for Bishop Verot in Fort Meyers, Florida. When you are 6-1 and have length and coverage ability, coaches typically find a spot for you sooner rather then later.

Malik Curtis #16 & Chris Graves #22 For Miami Hurricanes played together in high school at Bishop Verot..I'm so proud of y'all ‼️ remember keep putting God first and I love yall…I'm a proud mommy my boys🧡💚 @D1Chris239 pic.twitter.com/HpCR01wVmm

Khamauri Rogers is another tall incoming freshman corner standing in at 6-0 and 165 pounds. (Coach Feld will work on this) The former Under Armour All-American was the 41st best player and number sixth cornerback nationally according to ESPN last year. Despite his senior season being cut to one game, at least it was a good one. Rogers had a pick six to go along with four tackles. The former track and field athlete had offers from Auburn, Florida, Florida State, Georgia, LSU, Michigan, and Texas A&M before signing with the Miami Hurricanes.

Jaden Harris is the final true freshman cornerback signed in the 2022 class. Harris is an Atlanta, Georgia native who took his 6 foot frame and played at Riverwood high school. An intriguing aspect about Harris is his multi-sport background. Harris also competed in track & field and basketball in high school. Chose Miami over offers from Georgia Tech, Maryland, Michigan State and West Virginia among others.

Myles Mooyoung and Luis Gutierrez, Jr. are both listed as defensive backs on the Miami Hurricane roster and proudly serve as members of the practice squad.