LEGENDARY. That is another episode in the books. Behind the Episode time. Chapter 37 of the Mario era was the first one of its kind. A regular season OBB episode where the coach isn’t Mark Richt or Manny Diaz. Coach Cristobal recently had a rare emotional slip when discussing how much being the coach of the Miami Hurricanes means to him. He is elated. You know he is.

On the Greentree we discussed Brandon Innis and Mark Fletcher. Sure they are both current Ohio State commits but we know Mario won’t just sit there idly by. Josh Pate discussed on the OBB that a potential kryptonite to the Mario era “could be” his wide receiver NFL pedigree. So having Ohio State wide receiver coach Brian Hartline produce so much surefire talent year after year is going to be stiff competition.

Ohio State commits Mark Fletcher (19 carries, 224 yards, two touchdowns) and Brandon Innis (one touchdown) had themselves quite an afternoon while leading American Heritage to a 56-27 win over Los Alamitos on ESPN2. pic.twitter.com/z9GUCwtBEO

I started making heart gestures with my hands when Toast brought up the fact the locals love Heartline because of his Dolphin ties. Personally, I thought that was a bunch of hooey. Innis in particular isn’t going to Ohio State because Brian Hartline was a former Dolphin, he is going there because it’s Ohio State and they have been relevant. This is something the Hurricanes under coach Cristobal need to rectify. It starts this Saturday.

Storm Johnson is still the best Miami Hurricane name I have ever heard. That is the perfect matrimony between birth name and college you should be destined to play for. Ruben “Hurricane” Bain would be a close second. He was dominant in a Miami Central win vs. IMG 20-14. I’ll give Mario credit, the above names in the past would be in the “never coming here” category. With the Cuban coffee drinking, never sleeping hustler in Coach Cristobal, there is always a chance. It is comforting.

Over-Under. Toast brought up some good ones. Will someone have more tackles than Corey Flagg Jr.? He had 60. Flagg averaged 5 a game and played in 12. I think someone definitely gets more than 70. Hell, all you had to do was not miss like 127 tackles out of the 250 or so you missed last season and this is accomplished. Someone call Beatin-the-Bookie, I have a bet to place. 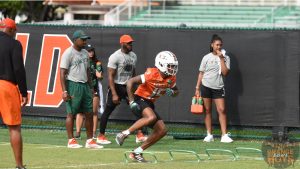 Tae’s Takeaways. You simply have no idea how infections Avantae Williams is. The second he came on the show you see a smile that instantly makes you smile. It is such a rare and uniquely wonderful trait in a human being. Tae credited me for working hard like Mario Cristobal because I looked like I was in an office. I was in my office. I was on shift. Seconds after the show ended I was dispatched to a cardiac arrest. This is my life and I wouldn’t trade what I do for anything in the world.

Tae wanted to play for Mario Cristobal at Oregon. Scoop asked the hard hitting safety a hard hitting question. His response was candid. “Why didn’t you play for him in Oregon?” He felt it would have been selfish to leave his daughter and fly all the way across the country. His daughter’s name is Sevyn. You want to see Tae’s world light up, mention her name. Then you totally understand why he stayed closer to home to play for the Miami Hurricanes.

“Eleven hats to the ball.” That is why the Miami Hurricanes are going to tackle better this season according to Avantae Williams. They will have relentless precision and this has been the hardest he has practiced his whole entire life. Coach Cristobal’s imprint is evident. It has taken root. His coaches fall under this prerogative. There are so many coaches out there these days, Williams doesn’t even know all their names. He admitted this.

My absolute favorite part of the segment is when I asked Avantae about the goat. What is one piece of advice that Ed Reed has given you that always sticks with you? His answer was simply fantastic which was riddled with technical brilliance. “Don’t let a disguise take you away from your job.”

“Don’t let a disguise take you away from your job-I don’t like when a quarterback knows what we are doing, I hate it. So I always try to disguise, fake communicate something that I am not doing, I always try to use the little tools that he gives me” -Avantae Williams

The fact Avantae Williams admits to putting out dummy calls to confuse quarterbacks is fascinating. Being somewhat familiar with the quarterback position this terrifies me. I can see why Ed Reed was a Hall of Famer and has a pristine gold jacket hanging up in his closet.

There are 279 players enshrined in the Pro Football Hall of Fame. The best bust went in last night, Ed Reed. pic.twitter.com/CJWsFGqnKF

The state of Florida Power Poll made its debut this episode. Toast had FSU ahead of FAU in the power poll and told Scoop and I that our bias was showing. No Sir. It was a fluke we lost last year and that is a main reason why Manny Diaz isn’t here anymore. 4th and 14 is a bad memory. I puked in my mouth watching that play unfold on the Student of the Game. Good news is, the OBB was in agreement. YOUR Miami Hurricanes are the consensus number one. They should be. The Hurricanes are the only ranked team in the state.

We named the episode cockplex. Right, of course we did. We have the behavioral equivalency of four year-olds. Just watch the below clip and you’ll know exactly what I am talking about. I have heard it referred to as “big dick energy.” One thing is for sure, the Miami Hurricane fandom isn’t shy on its bravado these days. We know that a storm is coming. Not Johnson, or maybe it is….