OPINION: Miami Hurricanes Need a Rebound in the NFL

Jonathan Ford was the sole individual from the 2021 Miami Hurricanes who found a home on an NFL 53 man roster this year. Ford was selected in the seventh round by the Green Bay Packers. He will now play on Sundays.

D’Eriq King, Charleston Rambo and Bubba Bolden were invited to participate in the NFL draft combine in Indianapolis. There were other draft-eligible Hurricanes of course. Amari Carter, Cam’Ron Harris, Deandre Johnson, Mike Harley, Navaughn Donaldson and Zach McCloud. These players will not play on Sundays, maybe ever.

The 2021 NFL draft fared a little better. Jalen Phillips and Greggory Rousseau were first rounders. But then you have to mind the gap. In terms of first round talent you have to leap four years (2017) to find the Chief David Njoku. 2016 had first rounder Artie Burns and 2015 heard Erick Flowers and Phillip Dorsett called on the first day.

Here is a little more refined perspective. From 2000 to 2004 the Miami Hurricanes had 20 first round draft picks and a staggering 40 players drafted. Those five years were historic greatness. It was a meteoric assault that shattered expectations and locked the NFL in a choke hold. The last five years however tell a much different story for the Hurricanes.

From 2018 to 2022 the Hurricanes only had two first round draft picks and 20 players drafted. That was 10 times less first rounders and 50 percent less overall drafted players. Whether you like to admit it or not, talent matters. The acquisition of talent that translates to the NFL matters too. There should be a relentless pursuit of NFL caliber players. When Miami won its last national championship it was at the apex of talent gathering.

There is something else that is festering unchecked. Who the hell is advising these kids? A string of Miami Hurricane players have declared early for the draft only to see their hopes and dreams shattered. Of course you want to play in the NFL. We get it. You have poured in so much blood, sweat and tears into this venture. You have dreamt about the moment as far back as you can remember. You have seen Roger Goodell shake your hand so many times in your mind, that it manifested blisters in real life.

Cam’Ron Harris, Bubba Bolden and Charleston Rambo bet on themselves. It was admirable. They lost. Currently the NCAA does not allow any mulligans. It is an all or nothing high stakes game of poker. If the NFL doesn’t take you, your college career is over. It is that simple. I wonder if given the chance, would all three of these players like to come back for one more year?

The 2022 version of the Hurricanes has running back depth concerns that Harris would fix and you definitely know Rambo would be a WR1 on this team. Would of, could of, should of. It is too late now. Life has to move on.

The change agent is here. Mario Cristobal will update the narrative. Coach Cristobal was the recruiter of the year in 2015 as a member of the Crimson Tide staff. The Oregon Ducks had its best recruiting class in history under his watch. On the trail, Cristobal is unwavering, unrelenting and unafraid. He is constant, consistent and calculated. The guy’s blood type is coffee. He doesn’t sleep.

A new Miami era of football is here. There is a perception that was shattered once the administration hired Cristobal. The University president, its brass, its AD, its board of trustee members are serious about football. Every move that has been made this offseason has signified it and then some. All this helps to get Miami back to where it wants to go.

If Coach Cristobal can amass the talent that translates seamlessly to the NFL, the Hurricanes will be just fine. That isn’t opinion, that is Miami Hurricanes’ history and the recent landscape of college football talking. Go take a look at Alabama’s, Georgia’s and Clemson’s recent track records. They are ferocious. 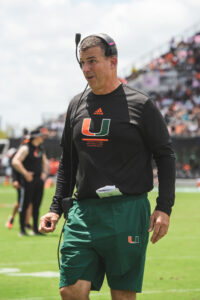 I am confident Mario will get the talent. He always has. So then there is one other matter left to take care of. The matter of kids declaring early and instead of playing on Sundays, they are spectators on Sundays. Predatory pimps sell them either bad dreams or false realities with no real skin in the game. I understand people are trying to make a living off players going to the NFL but for them it has always been a win/win. When one kid doesn’t make it, they will simply find another. A dream shattered is of no consequence.

Alonzo Highsmith was domino one. Howard Schnellenberger convinced the highly coveted recruit that if he stayed in Miami, greatness would happen. It did. Mario Cristobal can boast the same. He can sell that same dream. He can convince kids to stay home. Now once they become Hurricanes they need to listen to Highsmith’s advice about the NFL as though it was gospel. It just might be.

With decades of NFL experience under his belt, if Highsmith says stay, stay. If he says you should declare, declare. Under those pretenses I can see the Hurricanes improving on its NFL draft status again. You get great talent and you convince the ones who need another year, hey stick around your draft status will improve. What a novel concept.

This Saturday, the Miami Hurricanes will take its first steps in a brand new era. One with reprising committal to resources in which a Hurricane fan has never seen. The goal is to one day win national championships. You get there with NFL caliber talent. If there was ever an opportunity to recapture lightening in a bottle, it is now. One part relentless recruiter, one part NFL evaluator. There is your formula.