Finally, it is here. The 2022 college football season returns in earnest as Miami opens the Mario Cristobal era with a home game against FCS Bethune Cookman. A Miami Hurricanes football program that for so long has operated as a side business finally steps into the limelight for University administration. A coaching staff that could have been a commercial for AT&T’s now defunct Friends & Family plan has been replaced by a group of professionals, each qualified to fill a higher level role than their title suggests. Long-suffering Hurricanes’ fans get to see one of their own return and run out of that smoke ready to usher Miami into the world of big-boy football.

There will be dozens of season preview articles shared in the OBB Forums, but here at Roffers’ Rundown we will focus more on the data aspect of things.

Is it as simple as saying, “everything?” Head Coach Manny Diaz has been let go to be replaced by Mario Cristobal, who comes to the program having led Oregon to the Pac-12 title game three out of his four seasons with the program.

The changes go far beyond the Head Coach, as Miami now employs their largest staff in their history. An army of analysts, quality control individuals, graduate assistants, and sports science experts are now dedicated to getting the program to the highest level. Coach Cristobal has stated that his time at Alabama opened his eyes to the fact that “bigger is better” when it comes to staff size. An argument could be made this is the most accomplished football staff since the 1986 Miami staff that featured Jimmy Johnson, Gary Stevens, Dave Wannstedt, Tommy Tubberville, Butch Davis, Chuck Pagano, Art Kehoe, and Tony Wise.

To fully appreciate the credentials of the staff Coach Cristobal has assembled, consider that new Offensive Coordinator Josh Gattis won the Broyles’ Award in 2021 as the top Assistant Coach in college football. The award was created in 1996 and Miami has only had one coach win the award (Randy Shannon in 2001) and only two other coaches had even been a finalist in their career (Rhett Lashlee in 2013, Bill Young in 2007).

Awards can be subjective, but a quick review of the list of previous winners and finalists shows a strong track record for identifying real talent within the coaching industry.

What Scheme will Miami Run:

Coaches tend to tailor their scheme to the personnel on their current roster, but the core fundamentals of what they want to accomplish generally stay the same.

OC Josh Gattis will run a shotgun-heavy offense that likes to utilize the power run game and play-action passing game to remain efficient. Last season, Michigan ran gap concepts on over 70% of their run plays. Most commonly, Gattis calls “power” with a pulling G.

⤴️ H-Back Inserts on the Will LB

💰 RB is 1on1 vs. MOF Safety pic.twitter.com/7UR1ZFeraY

Second most common were “pin-and-pull” concepts. The base rules for the pin & pull system are as such:

Here is Wisconsin running the play just like Gattis did last year out of Pistol.

In the passing game, Gattis likes to call “weakside flood” which is a concept that allows the QB to have targets at all three levels (short, medium, deep) and calls for the QB to read deep-to-short depending on coverage and leverage of defenders. This is a Sean McVay staple play call (HC of LA Rams). This concept is most commonly run with play-action to the RB and can be ran with a boot (QB runs to one side of field) or from the pocket.

Coach Gattis likes to use the deep passing game and is fond of the concept “4-Verticals” which threatens both seams (hash mark routes) and allows for the offense to attack with both deep routes and “options” for receivers based on coverage and leverage.

With the talent in the TE room, look for Coach Gattis to employ “Leak” as a way to counter aggressive defenses against the run game. This concept allows the OL and TE to appear to be running their staple run concepts, but gets the TE to “leak” across the formation and get lost in coverage by a LB who has his eyes in the backfield. You’ll notice some similar layering to “flood” concept as well. An excellent layer to add to your passing concepts when you have a power run game. This is ran out of Pistol, which Coach Gattis likes to run often. 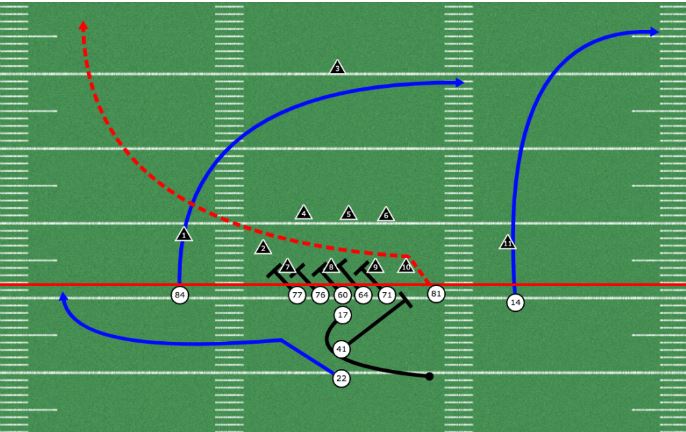 Finally, Coach Gattis uses pre-snap motion at a well-above average percentage, as over 70% of his play calls had some form of pre-snap motion. The Z WR, or “Field WR” tends to the motion player more often than not. Pre-snap motion is used as a coverage identifier as well as a way to hold backside defenders from jumping too far upfield.

On defense, you will see Miami be a multiple front. Meaning, they will at times have four-down linemen and at times have three-down linemen. As such, you saw Miami bring in transfers along the defensive line that can play multiple techniques along the defensive front (technique just means where they line up). The Alabama influence of what Coach Cristobal wants to see from his OC/DC is evident when you watch what the two top assistants run schematically.

Want to understand what Coach Cristobal wants to see change on offense? Look no further than this tweet from David Hale:

Miami was putrid in the run game last year. While former OC Rhett Lashlee did mostly good things in his time here, Coach Cristobal simply is not wired to have a soft run game. If there is anything you can be certain of this season, it is that these numbers will improve. Preaching physicality and better coaching along the OL will virtually ensure this improves.

Last season, Miami finished 58th overall on Expected Points Added per Play (.223 points per play). In the run game Miami finished 119th, they added only .032 points per play (average is .159). Essentially, Miami was five times below the FBS average per rush attempt. In the passing game, they fared far better, coming in at .382 points per play, which was good for 28th in the country. Here is a graph illustrating how Miami performed compared to ACC teams:

Flipping over to the defensive side, you can see why Miami wanted to undergo a transition on that side as well. Famously, Miami struggled with missed tackles last year, but the troubles went deeper than that. Overall, Miami finished 73rd in points per play at .200. Passing defense came in 79th with .274 points allowed per play, while the rushing defense came in 58th at .128 points per play. Here is how Miami finished among ACC defenses:

If 3rd down is the money down, Miami’s defense went broke, finishing 109th on the pivotal down allowing .652 points per play. Miami’s defense was quite good on 1st & 2nd down, they just weren’t able to make the plays when it mattered most. Will that change this season under Coach Steele? Answering yes would go a long way towards reducing the variance seen defensively.

Tyler Van Dyke– Miami’s QB returns after a torrid close to the 2021 season and has legitimate Heisman hype. TVD finished as the #18 QB in points per play at .427 expected points per play. He wasn’t just all passing, either, as he actually finished slightly ahead in expected points rushing per play (.439) than passing per play (.426). The big numbers are not simply a function of the offense, either, as D’Eriq King finished ahead of only 10 QB’s who played at least 100 plays last season (though playing Alabama impacted his results). QB1 is locked in and looks poised for a big season.

Jacolby George- You could win a lot of trivia bets if you had people guess which WR had the best per play numbers last season. It was George at 1.226 expected points per play (in a tiny sample). Coaches believe George has the best combination of size and receiving skills in the room, but he also was demoted to scout team at times in camp and never took that next step.

Will Mallory- Mallory seems as though he has been at Miami for a decade, but he is back for one last rodeo in 2022. Mallory has the skill set to be an All-ACC performer in this offense and last year had excellent data to back it up, finishing 28th among TE’s with .726 expected points per play. Elijah Arroyo also fared well in a small sample at .653 expected points added. Look for Miami to perform even better in the TE room in 2022.

Bethune Cookman- (Home) My model is tuned as having an FCS game as 100% chance to win.

Texas A & M– (Road) The model has Miami with only a 40.1% chance of going on the road and winning this game.

Middle Tennessee- (Home) Another game Miami will be a heavy favorite at 92.1% chance to win.

North Carolina- (Home) An old nemesis makes their way to Coral Gables and the ACC schedule gets into full swing. Miami has a 60.9% chance to win this game, reflecting that the difference between Miami at home vs. North Carolina is the same gap between Texas A&M at home versus Miami. Hopefully, I’m overrating North Carolina (or Texas A&M).

Virginia Tech- (Road) The thing with probabilities is that they are heavily regressed. In general, there is a much higher chance of unforeseen outcomes than fans typically give. That said, Virginia Tech does not fare well in my numbers. Virginia Tech being at home boosts their chances markedly, but I still see Miami with a 68.8% chance to win.

Duke- (Home) It is fairly shocking to me that my model believes Miami has a better chance to win against Duke than it does Middle Tennessee. 92.2% chance to win.

Virginia– (Road) One of the games I believe Miami has the best chance to lose in the ACC. With a legitimate college QB in Brennan Armstrong, Miami will need to be prepared to play their best game to win. 58.3% chance to win almost feels too high in this one. Virginia has a new coach and that could change the outlook here.

Florida State- (Home) This will be the first Miami home game I attend in person and I really want to disrespect Florida State more than I am, but my model believes they underachieved last season and are a decent team overall. Miami has a 60.4% chance to win, but I want to witness a complete effort in the Hurricanes’ rivalry game.

Georgia Tech- (Road) One of the teams my model does not respect at all, as Miami comes in with a 76.7% chance to win, even on the road.

Clemson- (Road) The game Miami is most likely to lose is this one. Matching up expected tendencies with the biggest strengths of the opponent makes this one look bleak. Miami with a 32.2% chance to win. That said, Clemson was putrid on offense last season and if that continues, this percentage could look a lot closer come game time.

Pittsburgh- (Home) Mario Cristobal was brought to Miami to win games like this one. Most likely, this game will have huge implications on the Coastal Division, with tiebreakers being impacted for the winner. Miami with a 54.0% chance to win at home means Miami would be a slight underdog if this were on the road.

The data adds up to an 8.3-3.7 projection. It’s my rundown and you can’t win .3 games, so I’m going to round that projection up to 9-3 and state that’s my expectation for the season.

Welcome home, Coach Cristobal, we are all excited for you to run through the smoke again!