The Miami Hurricanes kicked off their 2022 season with a 70-13 thrashing versus over-matched Bethune-Cookman. Coming off this game, which is really a part of their preseason schedule as they prepare for Texas A&M on September 17 in College Station, there will be various (over) reactions from fans and pundits alike.

But keep this in mind, this is just game one and it was just Bethune-Cookman.

In the grand scheme of things, it really doesn’t mean all that much. But here are a few thoughts from this game. 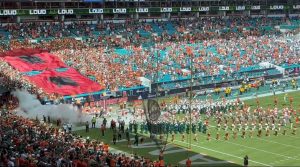 One of the big things that defensive coordinator, Kevin Steele, has harped on is getting to the ball as a unit, and leveraging the ball back inside. Quite frankly, this outing wasn’t the strongest in that regard. Too many times containment was lost, and plays sprung for big yardage on the perimeter. The first drive of the game featured a first down conversion on 3rd and 23 as the Wildcats drove for a field goal.

The Miami defense gave up way too many explosive plays against a team of this caliber. Overall, the unit gave up 342 yards of total offense. It will be interesting to see how the linebacker rotation plays out in the next several weeks, and how many snaps DJ Ivey gets on the outside at corner.

There’s been a lot of talk about who would be Tyler Van Dyke’s go-to guy. Well, it could be ‘the X-Man’, Xavier Restrepo, who had 5 grabs for 100 yards and a touchdown, in what was a relatively conservative game plan from Josh Gattis.

But it’s clear, Restrepo could be this units Wes Welker. A player that can consistently get open and help move the chains. It would not surprise me to see him have 70-plus catches this season in the slot.

Devin Hester isn’t walking through that door, but Key’Shawn Smith provided a punch in the special teams with three kickoff returns for 184 yards(with a long of 72). At this level of football, you basically have to hit that seam as quickly as you can and get north-south, Smith seems to grasp that. It will be interesting to see how he fares against the better teams moving forward.

I mean, this was just Bethune-Cookman.

OK, I hate to go here, but remember last years season opener when the ‘Canes got blown out by Bama? Kam Kinchens recovered a fumble, only to have it ripped away from him. So while he was donning the ‘Turnover Chain’, the ball was being awarded back to the Crimson Tide. That was when the chain jumped the shark, as Miami was down big in the first half.

Contrast that to this Saturday when Kinchens made a diving interception and proceeded to spike the ball, which resulted in a flag. Mario Cristobal had no issue letting him(and the rest of the defense) know that this simply wasn’t acceptable. Yeah, things have changed around here. This is what you call a change in culture.

There was no ‘Rooster’ as Jaylan Knighton was on the sideline, but did not play. The depth chart was just released about 15 minutes ago. (I kid, I kid) Knighton was held out due to an undisclosed soft tissue injury. With the running back depth being thinned out, it seems like the prudent move.

After all, this was just Bethune-Cookman.

So the attendance was announced at nearly 57,000 but being there, it didn’t really look like that many folks showed up. Remember, there is a difference between tickets sold/distributed and actual people that showed up. Regardless, it was good to see everyone out there, the tailgating seen at Hard Rock Stadium remains elite.

Finally, while the Hurricanes had a blowout, many other ACC teams had life-and-death struggles in week one. Namely, the two Carolina teams, and Virginia Tech flat out lost to Old Dominion. And if Scott Satterfield’s seat at Louisville wasn’t hot before….

We got to enjoy a blowout in what was coach Cristobal’s first game as the Miami head coach. It was a fun one on a hot afternoon in Miami.

But remember, it was just Bethune-Cookman.