It is a breath of fresh air, and it is very encouraging that this new coaching staff is hell bent on getting the best performance from all players regardless of the score and opponent. This staff understands that each week MIAMI needs to play its best, and when Miami plays its best. MIAMI is HARD TO BEAT. That is called player development. It is not only coach speak, but the expectation of the staff for this team to grow and improve week to week.

So here are five ways Miami can improve from Week one against Bethune Cookman to Week two against Southern Miss.

“How you do anything is how you do everything.”

1. CONTAIN THE QUARTERBACK
The Canes were stout in called rushing plays but struggled to keep contain against an athletic pairing of quarterbacks in Tyrone Franklin and Jalon Jones for Bethune-Cookman. The rushing lane integrity will need to be shored up going into week two against a Southern Miss team that likes to utilize the wildcat and various styles of offense.

Thank you for the question Beast. I gave a couple examples of how the #canes got victimized by the QB on pass plays involving backend man coverage. Hopefully this helps. https://t.co/Sjrj5FZwGg pic.twitter.com/2Sap9hFplf

2. BRING A BLANKET
The defensive backs were all the rage in fall camp. The improvement was noted across the entire two-deep, but it failed to show up consistently against Bethune-Cookman. Both DJ Ivey and Tyrique Stevenson were beaten in coverage or provided too much cushion to effectively defend the pass. This week expect to see a more aggressive coverage approach against a team in Southern Miss that likes to run the football with Frank Gore, Jr.

3. BALL SECURITY
There is not a lot to pick on from an offensive perspective. The offensive line kept the quarterbacks upright all day and paved big holes against an overmatched front seven. The backs ran for over 300 yards, and the receiving core had 0 drops in week 1. The offense scored 9 touchdowns in 10 offensive drives, and Lou Hedley had the day off punting exactly ZERO times. However, fumbling the ball under center in the red zone is unacceptable by any standards. The offense can improve week one to week two by simply improving ball security.

4. GET SOME MONEY D
Third down is money down. It can make or break games and ultimately seasons. The Canes on offense were a perfect 7-7 in week one. However, the defense gave up 5-14 third down opportunities. Although that is still a great percentage, some of the conversions were very costly. Giving up 3rd and 23 in the opening drive directly led to points, and a blown coverage on 3rd and 8 provided Bethune-Cookman with their lone touchdown on the day. The depth of the defensive line was hyped all fall camp, but they only came away with two sacks in the opener. The defensive backs were lauded for their development but were still a little too loose in coverage and inconsistent. A combination of rushing lane integrity and more consistent, tight coverage from the defensive backs will yield an improvement on third-down defense. 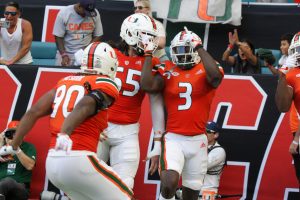 5. TACKLING
The tackling was much improved from a year ago. Gang-tackling and defensive leverage help in that regard. There were still some costly missed tackles in week one, and as a coaching staff you know they want that number to be zero. As a Canes fan you still want to see this area improve week to week as they get settled into the new defensive coaching and teaching. Expect this area to continuously improve throughout the season under the new staff.

The development never stops. Seeing Miami hit the mark in all five of these areas will no doubt lead to another big win on Saturday that looks to provide more of a challenge than the opponent in week one. Time to handle business before a storm approaches College Station, TX in week three.