Steve Kim Canes Corner. Miami’s preseason came to an end as they wore down a Southern Miss squad 30-7 at Hard Rock Stadium. While last week was an easy romp over an over-matched Bethune-Cookman squad, this was actually a struggle for a half.

Quite frankly, it was a dose of reality for the fan base. This team is still very much a work-in-progress for Mario Cristobal and staff. Some thoughts on what took place…

While the offensive line earned plaudits for their week one play, they were downright bad for the first 28 minutes of this game as they had all sorts of busts in pass protection, and Southern Miss got numerous hits on Tyler Van Dyke.

The tone was set on a false start on DJ Scaife on the opening drive on a 3rd and 1. This is a week where Alex Mirabel will have a lot to say.

To their credit, the O-line asserted itself on the long opening drive of the second half, where there was a clear emphasis on establishing a physical tone upfront. They marched the ball down the field to take a 17-7 lead on a 13 play, 77 yard scoring drive.

Corey Flagg played a solid game at middle linebacker. Yeah, speed will always be an issue for him, and he might struggle out in space, but today he was quick in diagnosing and closing in on plays. Speaking of the linebacker unit, there were times that Wesley Bissainthe and Chase Smith were on the field together. Look for more of this moving forward. 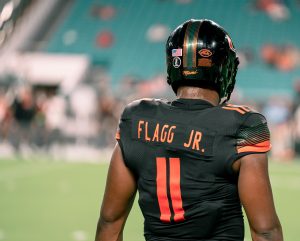 This was not Tyler Van Dyke’s best day, while his numbers were fine (21-for-30, 263 yards, 1 TD, 1 INT), he seemed to be staring down receivers, was late on a few throws, and he put the ball in harms way more than once. Perhaps he’s still adjusting to the new system of Josh Gattis, maybe it was the early pressure from the aggressive Golden Eagle defense.

Regardless, Miami will need a better version of TVD moving forward.

The Hurricanes might have a bit of a ‘Thunder and Lightning’ (and any time you have a 1-2 punch at running back, it’s given this moniker, much like the way every boxer of Irish descent is given the nickname, ‘Irish’) with the slashing Henry Parrish (24 carries for 116 yards, and a touchdown) and the bruising Thad Franklin (11 carries for 42 yards, and a touchdown). Thad really has the ability to wear down defenses with his physical style of running.

Jaylen Knighton got some action in the first half, after missing the season opener, but wasn’t seen in the last two quarters. ‘Rooster’ will play a major role at some point, he has the ability to make big plays out of the backfield both in the run and pass game.

While it’s clear that Xavier Restrepo will be the bread-and-butter of this passing game, it was good to see that Brashard Smith, Michael Redding and Key’Shawn Smith get a combined 10 catches. Bottom line, Miami will need some other receivers to step up going into ACC play and beyond. Next week, Jacolby George will return to the lineup after his two-game suspension.

So now it’s onto Texas A&M. Whatever was held back in the first two weeks, will be unveiled this upcoming Saturday. It’s why players come to Miami, to play in games of this nature in front of a national prime time audience.

It’s the first defining game of the Cristobal era.