I made the 5 1/2 hour drive down for my first game of the Mario era to watch the Canes take on Southern Miss. It was a great day for me Saturday, I tried Cafecito for the first time, sat in the club level and hung out with some good friends. The Miami Hurricanes came out of the gate sleepy and flat like the crowd at Hard Rock. The Boos and Boys started shortly there after.

Second half adjustments were made and Miami pulled out the win 30-7. The fanbase has been going crazy with overreactions and I’m guilty of the same thing but we are 2-0. Imagine what Texas A&M and Notre Shame fans are feeling right now, yikes. Anyway here are my BOYS (things I liked) and BOOS (things I didn’t like) in week two. 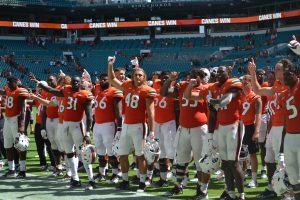 Henry Parrish Jr. is a dude (AGAIN). Picking up where he left off last week, Parrish rushed for 23 carries for 109 yards and a touchdown. Through two games Parrish Jr. is averaging 7.2 yards a carry.

The Rush defense. All we heard this past week was Frank Gore Jr. and that Southern Miss rushing attack, Well.. it was non existent. Much respect for Gore Jr. and I hope he has a great career but the Canes shut him down Saturday. Southern Miss 33 total rushing yards. 29 for the Zach Wilcke the QB and only 10 yards rushing for Gore Jr. Then you add in the negative plays and boom.. 33 rushing yards, how can you complain about that.

Corey Flagg was all over the field yesterday and led the team in tackles with 6 and had 1.5 TFL. Is Flagg turning the corner? it remains to be seen, but it was refreshing to see.

The Stache. Having a good kicker is so important. Andy Borregales went 3/3 on field goals Saturday. He was good from 30 yards, 33 yards and 48 yards.

Well, a couple things to touch on here for me. First off being so sluggish in the first half. We see it every week where teams will come out slow and end up pulling away but I just didn’t expect it in this game. 10-7 at halftime was very disappointing to me but credit to the adjustments made in the second half. Not that this is a “big boo” because he ended up having a decent stat line but TVD was off.. low throws, behind his receivers and a few over throws. Let’s hope we don’t see anything like that next week or it could bite us. The Cornerbacks continue to get picked on, it’s something that really needs to be fixed as we start to get into the meat of the schedule.

Miami is 2-0 and on to College Station next week. Mario’s first statement game.

Did I mention that Florida lost? I was told Baby Vince Young was the next Heisman winner. hmm.. odd. Well.. their stadium is on campus.