App State puts the pressure on. It was a shocker. The Appalachian State Mountaineers located snuggly in Boone, North Carolina beat the Texas A&M Aggies. The mountain men left the comfort of their mountain ranges and tangibly took the midnight voice away from the 12th man. The upset occurred on Kyle Field in College Station, Texas. That is exactly where the Miami Hurricanes are heading this week.

Jimbo Fisher has won a national championship. And the Aggies paid him a lot of money to be their head coach. Fisher’s calling card has always been that of an offensive minded guy. But what the Mountaineers did to the Aggies on the stat line didn’t even look real. The Mountaineers took Jimbo’s “brilliance” and suffocated it to the tune of 186 total yards.

Texas A&M’s quarterback Haynes King threw for a meager 97 yards and had a total QBR of 21.3. That performance was in essence corpse-like. You immediately sit there scratching your head and thoughts begin to materialize. It might be time for Jimbo to give up play calling. Was Jameis Winston that good in college?

Again, this isn’t taking any credit away from App State. And not even in the slightest. They are a damn good football team who is incredibly well coached. They were one field goal away from taking down the Miami Hurricanes last year. After that contest former Miami Hurricane Head Coach Manny Diaz was ridiculed a bit for that one quote. You know the one.

“This is what App State does to people. They come and win these games on the road. But they didn’t do it tonight. That’s because of the heart and spirit of our guys to gut it out in the end.” -Manny Diaz

Diaz somehow went from the ridiculed to validated in the course of one week. The Appalachian State Mountaineers apparently do in fact do that to people. Their track record puts them on par with being a conference opponent. Not their Sun Belt conference, your conference. ACC, SEC, Big 10 it doesn’t matter. Expect a dog fight anytime the Boys from Boone come into town.

GAMEDAY IS COMING TO BOONE❗

When Mario Cristobal was named head coach of Miami most fans celebrated. After the elation of the hire wore off and the schedule came out, week three immediately jumped out. How could it not? Fisher has not coached at FSU in some time but we still associate him there. The Miami Hurricanes never beat Jimbo Fisher while he was the head coach at Florida State.

And who can forget Fisher taking down his former mentor last year? The Aggies stunned the Saban-led Tide 41-38 at Kyle Field. TAMU then paid their way, excuse me, signed their way to the number one recruiting class in the country last year. You add the customary SEC preseason bump bias and suddenly the Miami Hurricanes were enroute to face the sixth team in the nation. 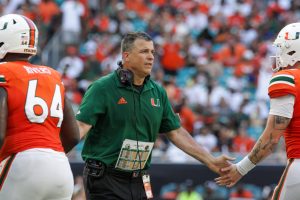 There is a healthy fraction of the fan base who predicted a loss this week. Let the Orange Bowl Boys dynamic be the microcosm that proves it. 2/3rd’s majority had the Miami Hurricanes losing to Texas A&M during its preseason predictions. For the record I had a little more faith and I was the minority voice who felt that Mario and staff had something to prove. Reminder, this was even before that pesky team from Boone ruined our Game Day chances.

I am willing to bet that all those fans who predicted 10-2 (There are many of you) with one of those losses being to TAMU, they might be hedging a bit. If App state can go into Kyle Field and win, then the Miami Hurricanes have absolutely zero excuses not to win. But you have to know that is not sound rationale if you have followed college football for any length of time.

College football is good at one thing. And that is not making sense. It did not make any sense seeing a top ten team lose at home. But it still happened. If the Hurricanes go on to lose this game, what App State did is completely and unequivocally irrelevant to that fact. The Hurricanes performance will stand on its own two feet. It has too.

Still, you can’t erase the fact that suddenly this matchup became more winnable after last week. The Hurricanes win and the narrative is Texas A&M was overrated. And no big deal, every year several SEC teams are. But if the Hurricanes lose, suddenly the Hurricanes are perceived overrated. Because if App State was able to beat them…..App State put pressure on Mario whether we liked it or not.