Following a comfortable 30-7 victory over the Southern Miss Golden Eagles in the sweltering South Florida sun, the Miami Hurricanes look to turn the heat up even more. Though the temperature in College Station is forecasted to be 84 degrees at game time, the Canes intend on bringing some fire to a game that has suddenly lost some luster.

Instead of the juice of a college game day match-up, the Canes will need to bring their own as they will be facing a highly talented, but young Texas A&M squad that will be hungry for redemption after being embarrassed at home against those pesky Appalachian State Mountaineers (they do this kind of thing to everyone though).

The tone heading into this game on the national stage is in line and step with the message this program has been delivering since the beginning: the Canes must focus on constant improvement. Coach Cristobal stated in his Monday press conference, “that’s the thing for us, is constant improvement… there’s a lot of things that are there right in front of us that we need to work into reality and not so much just hope and wish that it comes out that way and it starts with the preparation.” The Miami Hurricanes will work on Greentree to be better week 3 than week 2, and better week 4 than week 3.

So here are five ways Miami can improve from Week 2 against Southern Miss to Week 3 on the road against Texas A&M. 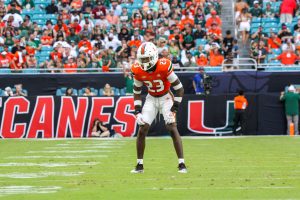 SHOW UP
The Canes slept through most of the first half against Southern Miss. The physicality and intensity that is demanded of this team didn’t present itself until the start of the second half. Miami can improve this week, by setting the tone early in College Station. In football it is a mindset, you either set the stage with your intensity and physicality or you are trying to match your opponent. The Canes must be the independent variable, and bring it all the time, no matter what.

PRESSURE PICK UP
The Canes gave up 4 sacks last week to a Southern Miss team that did a good job of preying on miscommunication of the offensive line mixed with TVD holding the ball a little longer than normal. Obviously, sacks are drive-killers, and for this team to be successful long term the starting quarterback will need to stay on his feet. The Canes can improve this week by improving communication up-front, recognizing stunts and coverages, and executing their fundamentals better. If TVD’s jersey stays clean this week, the Canes will have success.

THIRD & GET OFF THE FIELD
Giving up 7 points is certainly considered a good performance in today’s college football, but if there was one area where the Miami defense made fans pull their hair out it was third-and-long scenarios. On plays of 3rd and 8, or longer, the Miami defense gave up 2/4 attempts in the first half. Yikes. The defense went on to improve in the second half in this area by only allowing 1/6 third-and-long conversions (though the USM quarterback bailed them out by running out of bounds a yard short on one such play). The overall third down defense was serviceable given the Golden Eagles were held to 5/13 throughout the game. However, 3/5 of the conversions were on third-and-long. That is simply not acceptable and must improve. The Miami defense can take significant step forward by simply taking care of business on third-and-long and getting off the field.

VERTICAL PASSING GAME
As football evolves it is constantly referred to as basketball on grass. This is a nod to the explosive perimeter players that can flat out change football games with their abilities to make plays down the field. Through 2 games, it’s been apparent that opposing offensive and defensive coordinators are going to challenge Miami’s perimeter players. The Canes have not had success in the vertical passing game offensively, and they have been victimized at times defensively. The Miami Hurricanes can take a sorely needed step forward by winning their battles on the perimeter down field. If this team is going to leave College Station with a win, the receivers and corners are going to have to leave their mark on the game.

BROYLES AWARD ME
The University of Miami made a statement by going out to get Mario Cristobal. Paying more money for coaches, coordinators, and assistants than they ever have. With the burden of investment, comes the expectation of return. Through the first two weeks the Canes were able to show base plays in base looks on offense. The game plans were simple: we are more talented, we are more physical, and we will impose our will on you in the trenches. The competition takes a massive step up this week. With that fact well-known, look for the Canes coordinators to finally show some wrinkles to a talented, but young and vulnerable Texas A&M team. Expect Josh Gattis to present personnel packages, pre-snap movements, formations, play-attachments, and concepts that we haven’t put on tape yet. It’s time to show what this offense is capable of on the big stage.

The stakes are as high as they have ever been with Mario Cristobal at the helm. This isn’t a spring game, Bethune Cookman, or Southern Miss. This is the first true test as head coach of his alma mater, and fans want to win now. Coach Mario Cristobal understands it’s on ALL the Canes to get themselves right if they want to snatch victory from the over 102,000 fans, and walk out of Kyle Field with a clear message to the rest of the college football world: The U is coming.