Boys and Boos Texas A&M edition. The Miami Hurricanes traveled to College Station to take on Texas A&M. This was the first primetime, measuring stick game of the Mario era. I had the audacity to pick against my beloved Hurricanes this week in our pick’em. I just did not feel good about this game at all and unfortunately Miami suffered their first loss of the season 17-9.

Self inflicting wounds was the name of the game last night, Miami beat themselves. The Hurricanes had more yards, first downs and TOP. A giant key to the game was some special team miscues. This game shows growth with the Hurricanes though, there was plenty of good to come out of this. Here is my BOYS (things I liked) and BOOS (things I didn’t like) vs. Texas A&M. 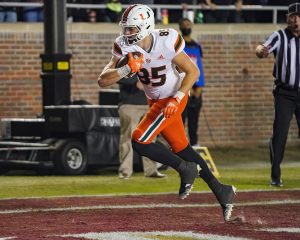 The run game was great in my opinion. Henry Parrish Jr. had 85 yards on 16 carries that’s an average of 5.3 yards a carry and Rooster had 77 yards on 14 carries good for 5.5 yards a carry. That’s a bright spot in this offense, I have no worries about the Miami rushing attack going forward. That offensive line was mauling the A&M front, huge props to those guys. Also we didn’t give up a sack, that’s a win.

DJ Ivey, after all the slander he has received from the fans (I’m guilty) the man showed up and balled out. Ivey had two pass breakups and 3 tackles. The Defense as a whole played phenomenal besides the play where Achane broke 100 tackles to score. The D came up big time and time again with key stops.

Will Mallory had a game, he was the Canes leading receiver with 6 catches and 56 yards. Glad he is okay after that nasty hit, could of been very bad.

Okay, so Special Teams is going to be the boo of the week.

Well.. we had heard about the drops in practice and we finally seen them. Henry Parrish dropped a wide open pass that could of been 6 points. TVD was also OFF again, one that sticks out in my mind big time was missing a WIDE OPEN Michael Redding over the middle. Van Dyke missed a decent amount of throws but the wide outs didn’t help him either. I give the blame to both, someone has got to step up with Restrepo out.

What was Miami doing in the Red Zone? Honestly.. Miami had drives of 65, 73, 71 and 83 yards all stall once we got into the red zone. You can’t settle for three all the time and win games, you just can’t. In Between the 20’s the offense was humming.. they get inside the 20 and just disappear.

Special teams woes.. (not you Hedley, keep doing your thing big guy) Special teams was the difference in this ball game. If Stevenson doesn’t muff that punt then the game would of likely been 10-9 late in the second half, that 7 point swing was huge. Borregales missing two field goals wasn’t a good look either to his credit the blocked kick was going in, despite all of that.. leaving 6 points out there wasn’t good.

The loss stings, but there are positives that came out of this game. How this team responds in the next couple of weeks will be telling. Will Miami come out fired up ready to prove a point? Will they come out flat against Middle Tennessee and hear boo birds? Time will tell, it’s time to get back to work. The goal is still right in front of them. As always, Go Canes.