A Problem with the Offense, How Do We Solve It?

Four games into the Coach Cristobal era there’s one thing for certain, there’s a problem.

No, the staff did not inherit a perfect team. Last year the Miami Hurricanes finished 7-5 with glaring holes on defense led by then head coach Manny Diaz but touted a promising offense down the stretch orchestrated by Tyler Van Dyke. Van Dyke finished the 2021 campaign on one of the hottest stretches in not only Coral Gables, but all of college football.

Six straight games of over 300 yards passing and 3 touchdowns. That hot streak feels like it was 10 years ago.

With a struggling start to the season bleeding into a forgetful performance last Saturday, the Heisman hopeful and projected NFL quarterback was benched after opening the game with 2 straight interceptions and never recovering. Many fans booed. Some fans even pile on struggling players. This fan asks why.

Why is there a problem?

There are many ways to approach structured problem-solving. Asking why multiple times helps guide you to the root cause. In my world, we use the DMAIC method.

Measure and Analyze the problem

So how do we define this problem?

The next steps center around asking yourself “what changed” and “can we measure it?”. The first question is easy, Miami changed its coaching staff. With the exit of Manny Diaz, Rhett Lashlee moved back to SMU and became the Mustang’s head coach. In early February Miami hired Broyles award-winning OC from Michigan, Josh Gattis, to lead its offense. Coach Cristobal wanted a physical power run style offense, one which Gattis coordinated at Michigan, like the 2021 Oregon Ducks. 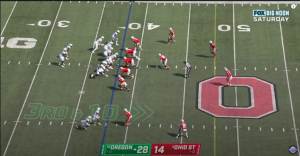 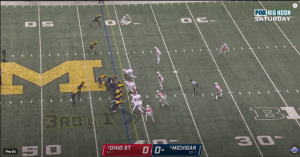 This is a much different scheme than what Van Dyke ran in 2021. Miami’s offense was heavily based around downfield big shock plays and picking up yards in chunks. Van Dyke’s Average Depth of Target (ADOT) averaged 11.6 in his final 4 games of 2021. In his first for of 2022, he’s averaging 8.4. Looking at the passing depth charts you can see the Michigan offense was much more content throwing shorter passes. 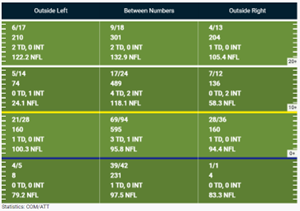 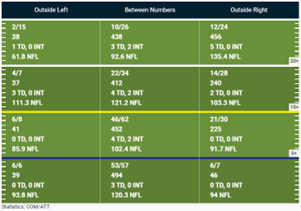 Miami’s 2022 passing depth chart is very similar to the trends you see in the chart of 2021 Michigan. One huge on-the-field difference that could be contributing to lower deep shots is the absence of Charleston Rambo. Looking at his 2021 performance, Rambo accounted for 32 of the 10+ targets but only 8 of the 20+ targets. TVD was going deep to whoever was open.

There is another addition on the offensive staff to understand, Frank Ponce. Ponce was the play caller for App St in 2021 before moving to Miami’s Quarterbacks Coach and Passing Game Coordinator. Herein lies the question: Is the passing game influenced by Ponce? 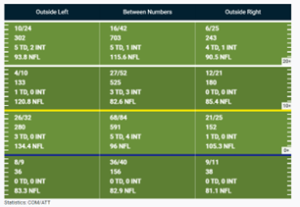 Looking at the passing approach Ponce took in 2021 I would have to say the offensive passing scheme doesn’t have a lot of input from its passing game coordinator. The passing depth charts are one way to analyze this, but so is the eye test. What did we see historically from Gattis and Ponce as coordinators in 2021 and what are we seeing in 2022.

One example is the power QB run. This was not a staple of the App St offense in 2021, but notice the same play in the 2021 Michigan vs Ohio State game that Miami ran vs A&M.

There are numerous more examples of the similarities on tape, too many to list here.

One thing you don’t see in the Gattis offense is motion to help the number’s game for passing. There is often motion to bring in a slot guy to help block, but Ponce used motion to help Chase Brice identify coverage and force the defense to make decisions in coverage.

Looking at the scheme, the passing breakdown, and the difference in their previous programs I think it’s reasonable to say that this is more a Gattis offensive passing scheme than Ponce.

Establishing this gives a clearer view of the next issue, route concepts. Since the A&M game, it’s been highlighted by former coaches, and even our own OBB Ro, that there are gaps in the plays themselves. In Ro’s recent student of the game, he highlights the current issues with the concepts. In looking back at the Georgia vs Michigan, you see similarities to what he’s highlighting present day: 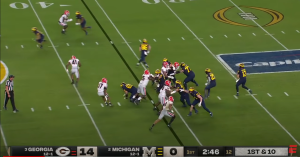 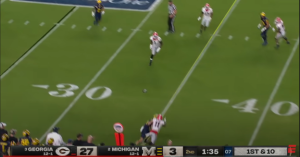 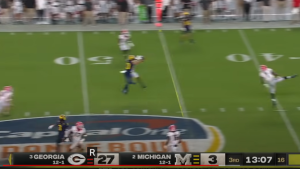 Many different examples of multiple WRs within 10-15 yards of each other surrounded by defenders. I know that Georgia’s defense was all-world in 2021, but when you needed to scheme against it, this is what you brought.

Measuring and analyzing the problem points strongly to the offensive scheme, how can it be improved?

Believe it or not, this isn’t the first time a Gattis-led offense needed to improve. Taking over Michigan’s offense in 2019, the “speed in space” approach he touted entering from Alabama failed. Struggles forced him to adapt the offense back to a more Big10-style. During the 2020 season as the offense continued to struggle, he decided to leave the box and join the sidelines, saying “Being on the field and more so rallying the troops…to be able to provide that leadership, in good times and bad…”.

To start the 2021 campaign Michigan promoted the Offensive Line coach to Run Game Coordinator. A long-time NFL assistant was also added to the staff to coach QBs and add analytics. By the end of the season, Gattis was named the Broyles award winner. Things should have been up and up in Ann Arbor, however, after Jim Harbaugh took an NFL interview, things began to sour. Gattis, in an exit message to players, noted “In life I would never advise anyone to be where they are not wanted”.

So, what happened here? There are many speculations that at some point Harbaugh took over the play calling. This thought is amplified by Gattis’ replacement Shemar Moore in a USA Today interview where they highlight Moore calling it a by-committee system.

With all that said, what is the fix?

I’m not sure, but I would start with what’s highlighted above. There is a precedent that these steps helped propel Michigan to its first Big10 title since 2004.

Come out of the box and get on the sidelines.

Talk to your players face to face. Help them. Help TVD. Look hard at the schemes Ponce and Lashlee ran last year and improve your current scheme with concepts that worked well for them.

Utilize Ponce’s scheme to rebuild trust with Van Dyke. Find a way to mesh the power run game that Coach Cristobal covets with the modern styles in the passing game that Van Dyke used to create nightmares for defenses at the end of 2021.

Will this fix everything? I don’t think so, but it does show potential for improvement.

My hope is the staff takes a solid problem-solving approach and works hard to Control their improvements. If they don’t? Well, we’ll see it in the data… 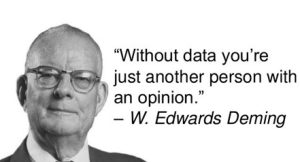