Through the first four games and with a 2-2 record, one thing is for certain; The Miami Hurricanes offense has no identity.

While we anticipated some bumps in the road early on transitioning from Rhett Lashlee to Josh Gattis, I don’t think any Canes fan could have predicted such a rocky start.

So far, here are a few of Miami’s offensive stats:

-3.3 rushing yards per attempt against FBS teams (which would be 109th nationally)

So as you can see, the Josh Gattis offense has done little to help out the Hurricanes, especially in their three games against FBS opponents.

Against Middle Tennessee State on Saturday, Miami’s offense managed only 10 points through 2 1/2 quarters with Tyler Van Dyke at quarterback. While Jake Garcia provided a spark that led to two more offensive scores, something needs to be done on that side of the ball.

I don’t care whether it’s Tyler Van Dyke or Jake Garcia starting, but Miami needs better play at the most important position.

What does today’s performance do to Tyler Van Dyke’s #NFLDraft stock?

Last season, the reason why the Canes were able to rally and finish with a 7-5 record was mainly because of Van Dyke. His control of the offense had Miami humming down the field, which resulted in Miami winning five of their last six games.

Tyler Van Dyke in the second half of the 2021 season:

Only QB in the FBS 🙌pic.twitter.com/aBEluPiyCf

If Miami is going to turn this season around, it starts with the quarterback. If the Hurricanes want to finish strong and maybe play in Charlotte come December, the QB play HAS to improve.

Either Van Dyke improves quickly and lives up to those first-round projections, or the Jake Garcia era begins.

The OL has been up and down so far in 2022. Against MTSU, they gave up four sacks and eight TFL’s, simply not good enough.

Miami ran 38 times for 60 yards, averaging 1.6 yards per carry. Not going to cut it pic.twitter.com/1rKY22hhUJ

Zion Nelson coming back will undoubtedly provide a boost to this unit. With Zion hopefully returning soon, I’d love to see him go back to his natural spot at left tackle. From there, I’d say move John Campbell Jr. to right tackle, sliding DJ Scaife to right guard, and taking Justice Oluwaseun out of the starting lineup.

Though, the offensive line and their further progression begins with Zion coming back and playing like he did in 2021.

– Another jump in strength could skyrocket stock pic.twitter.com/itilyGNsTr

3. Get The Tight Ends More Involved

We’ve talked at length about how Miami’s receivers aren’t getting it done. Xavier Restrepo and Jacolby George being out until (hopefully) late October-early November doesn’t help either.

However, the passing game must move forward, so getting the tight ends more targets could be a difference maker.

• Mallory is a proven player for the Canes at TE and Arroyo has a lot of potential and should have a breakout season this fall.

So far, Will Mallory is tied for 1st on Miami in receptions (12) for 127 yards. Elijah Arroyo has 5 catches, and Jaleel Skinner has two.

didn't cristobal say there were plans to involve jaleel skinner in the scheme this week?

One of the biggest advantages the Miami Hurricanes offense has is the talent and depth of their tight end room. Mallory is slowly catching on, but why not get someone like Arroyo more involved? Or Skinner?

How do you stop this?

Instead of relying almost solely on unproven receivers to step up, feed the tight ends, and watch the offense improve.

4. Red Zone Offense Has To Improve

You could clearly see in the last two games, Miami’s red zone offense has become a non-factor. Scoring only three touchdowns in their last 11 trips to the red zone, that’s how you lose games.

Very confused by some of these redzone play calls 🤔

Against Texas A&M, having to settle for three field goals instead of touchdowns was one of the deciding factors in the Canes loss.

Then on Saturday, two missed opportunities for Miami shut the door on any possible comeback.

Finally, we get to Miami’s Broyles Award winning offensive coordinator. While we all hyped him up during the off-season, he’s been more disappointing than Dan Enos was through his first four games at Miami.

Going to throw a fastball up and in

I 100% believe in Josh Gattis and this offense. I believe it will get worked out

I 100% believe that his Broyles Award is meaningless. Because three games in, he's not even close to winning that award again

It's this UM that matters #canes

It’s obvious that Gattis’ pro-style scheme that found success at Michigan in 2021, isn’t working in 2022 in Miami.

Tyler Van Dyke doesn’t seem comfortable in the pocket. They’re not using the running backs in the passing game like Lashlee liked to do. Then, there’s been a complete drop-off when it comes to explosive plays. 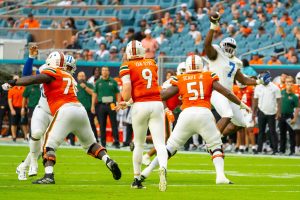 Where does the blame go?

What we heard so much about Gattis going into 2022, was that he was great when it came to adjusting the offensive scheme to his personnel. Obviously, he’s going to have to do that again if the Hurricanes want to get back on track.

About the Author: Marshall Thomas