Canes Corner. Last week I was watching ‘College Football Live’ on ESPN when they did a segment on the upcoming HBCU games where they brought up Prairie View A&M. The Panthers just so happened to be lead by Bubba McDowell, who played on the great Miami teams of the 1980’s as both a defensive back and a special teams demon, before having a long NFL career.

As they Hurricanes prepare for this weeks game against North Carolina, I was reminded of a story I did on McDowell long ago for Canestime.com.

He recalled after a particularly ragged practice that a perturbed Jimmy Johnson gathered the team and reminded everyone that scholarships were one year renewable — nobody was guaranteed four years at UM. That those who kept causing headaches for him with Tad Foote, not practicing hard, or playing well could be jettisoned at the start of the next semester at Miami.

”READ….THE….FINE….PRINT,” was the statement that Johnson kept repeating to the players, over and over. It was very simple, everyone’s place on the team was in jeopardy.

When asked how it was for him and his teammates to hear this warning, McDowell answered, ”Scary.”

McDowell says that the next days practice, and those following it, were much focused and productive.

I’m reminded of this because I get the sense that coming off that embarrassing loss to Middle Tennessee State that Mario Cristobal may have the same feeling that Johnson once did. It’s too early to say that this game is a referendum on Cristobal, especially given that it’s just his fifth game in his first season, but he has to figure out which guys on this current roster have a future with the program moving forward.

The MTSU loss was bad, but what was really alarming is the amount of players that looked like they simply didn’t want to be out there on the afternoon of September 24 at Hard Rock Stadium. The lack of passion was pointed out by Mark Herzlich of the ACC Network on that broadcast.

Slowing down the potent air attack of the Tar Heels lead by Drake Maye will be difficult, and the Miami staff has to get Tyler Van Dyke’s mojo back. Coming off a bye week, they are still a banged up team. A win this weekend, and they can still focus in on the Coastal division. A loss, and this season could go into a tailspin.

Regardless of the result, Cristobal has to find out which players really want to play this game. And which ones just want to call themselves Miami Hurricanes. 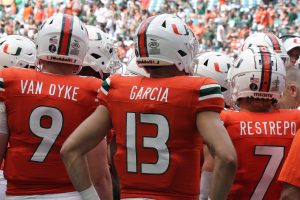 Cristobal made it clear earlier this week that Van Dyke would be the starting QB. There has been some clamoring for Jake Garcia. Perhaps Van Dyke has a short leash should the offense get off to a slow start again and fall behind. My view is that Van Dyke should’ve been pulled a bit sooner than he was against MTSU.

A few years ago in Mark Richt’s last year as the Miami head coach in 2018, there was some shuffling of the position between Malik Rosier and N’kosi Perry, where quite frankly, both players struggled.

I also recall way back during the 2003 season where Brock Berlin was pulled after he struggled in losses versus Virginia Tech and Tennessee, and Derrick Crudup was installed as the starter. But as the offense sputtered in the next game, Berlin was put back back in for the rest of the season. The offense was a far cry from previous years, and they wasted a national caliber defense that was loaded with future NFL first round draft choices (Sean Taylor, Vince Wilfork, DJ Williams, Antrel Rolle and Jon Vilma),

A decade earlier, after a loss to eventual 1993 national champion, Florida State, Dennis Erickson made the move from Frank Costa to Ryan Collins. Collins had some early success and his mobility gave the offense a spark, but eventually the unit stalled. After getting blown out by Arizona in the 1994 Fiesta Bowl, the job was opened back up in the spring, where Costa won back the starting position.